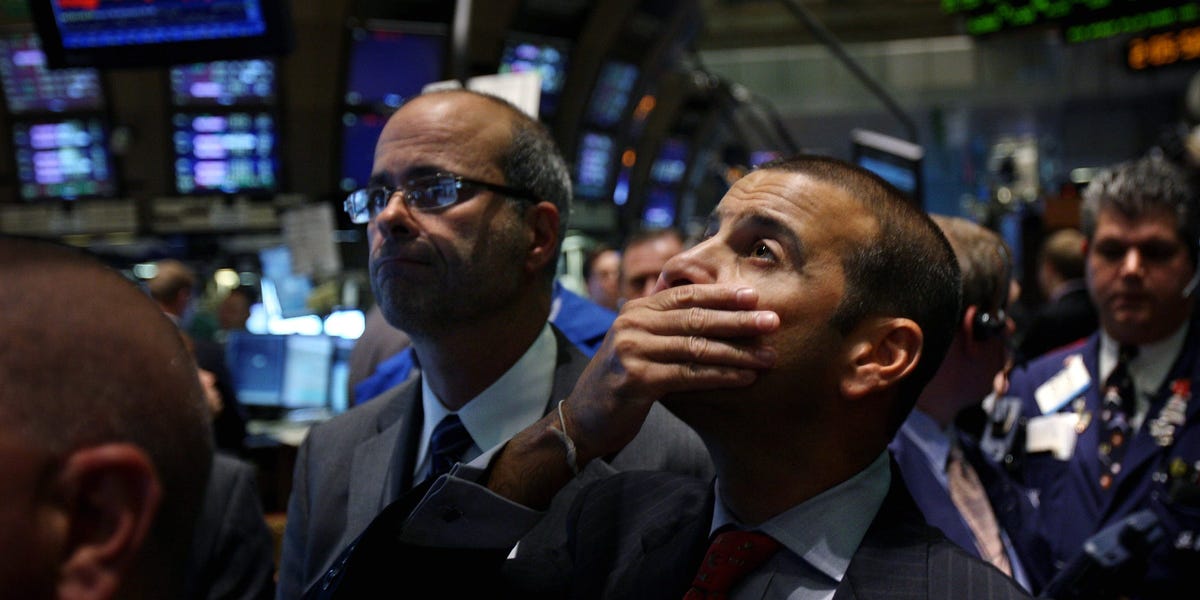 
Investors seem to be nervous. And perhaps rightfully so.

Stocks are up 90% from the lows in the last year-and-a-half, an extraordinary bull run. Many measures of valuation show historic over-extension. The Federal Reserve is getting set to taper asset purchases. Treasury bond yields are expected to rise. The pandemic isn’t quite under control yet. Chinese real-estate firm Evergrande’s near-collapse sent shock waves throughout the global financial system.

Many of the top strategists on Wall Street have said in recent weeks that some sort of pullback is coming.

Stocks’ performance in recent weeks has reflected this cautious outlook. The S&P 500 is down about 4.5% since its September 2 peak of 4,536. The lagging performance has sparked questions about whether or not the market has peaked.

But according to David Hunter, the chief macro strategist at Contrarian Macro Advisors, the fact that there’s timidness on Wall Street and among investors right now signals that stocks haven’t yet topped out in this

“Everybody on Wall Street, and like you say, an awful lot of people on main street, are focused on markets at a top or markets past the top or just about to the top,” Hunter said during a September 27 episode of the Coin Stories Podcast. “And I think when you get that kind of mentality or that kind of a narrative out there that’s so popular, you know you’re probably not there.”

But that will come crashing down when the

Federal Reserve
begins to cut back its balance sheet and taper its asset purchases, Hunter said. And he expects the pullback to be big: up to 80% peak-to-trough.

“We’re going to see more wealth destruction next year I think — once we get past this last move — than we’ve we’ve ever seen,” he said.

As far as timing, Hunter wouldn’t give a specific date, though it seems he expects the crash in the months ahead. He has said in recent months that he expects it to occur around the 4th quarter. He also has said that inflation continuing to rise beyond the Fed’s expectations will cause the central bank to taper more aggressively and more quickly than investors had anticipated.

Following the crash, however, Hunter says fiscal and monetary stimulus efforts will lift stocks back up quickly again.

As of now, the Fed is expected to start tapering toward the end of the year, reducing its balance sheet by $15 billion a month from the current amount of $120 billion a month.

Hunter’s call for an 80% crash in stocks is on the margins, and would be among the largest drops in history. A drawdown that large has only happened once in history, during the Great Depression years. The S&P 500 fell 57% from its peak during the 2008 crisis, and 34% during the COVID-19 crash.

But again, most on Wall Street seem to share his bearish sentiment to some degree, and a 15% downturn from recent highs, for example, wouldn’t necessarily surprise many.

Plus, stocks are in an unprecedented situation. The Fed’s balance sheet is the largest it’s been since they began quantitative easing following the Global Financial Crisis, and this along with its zero-interest-rate policy, have propped up valuations to historically high levels. Taking this liquidity away could very well trigger a downturn.

At the same time, tapering has been on the minds of investors for months, so it may be priced into stocks to some degree already. Further, the Fed being willing to taper signals that they believe the economy is in a healthy enough place to do so, meaning stocks presumably shouldn’t suffer all that much.

So, it’s anyone’s guess how the market reacts once the Fed actually begins to taper. But if Hunter’s call is even half correct, investors would do well to keep his warning in mind.

Foreign Exchange Reserves Down By $997 Million To Touch $638.64 Billion