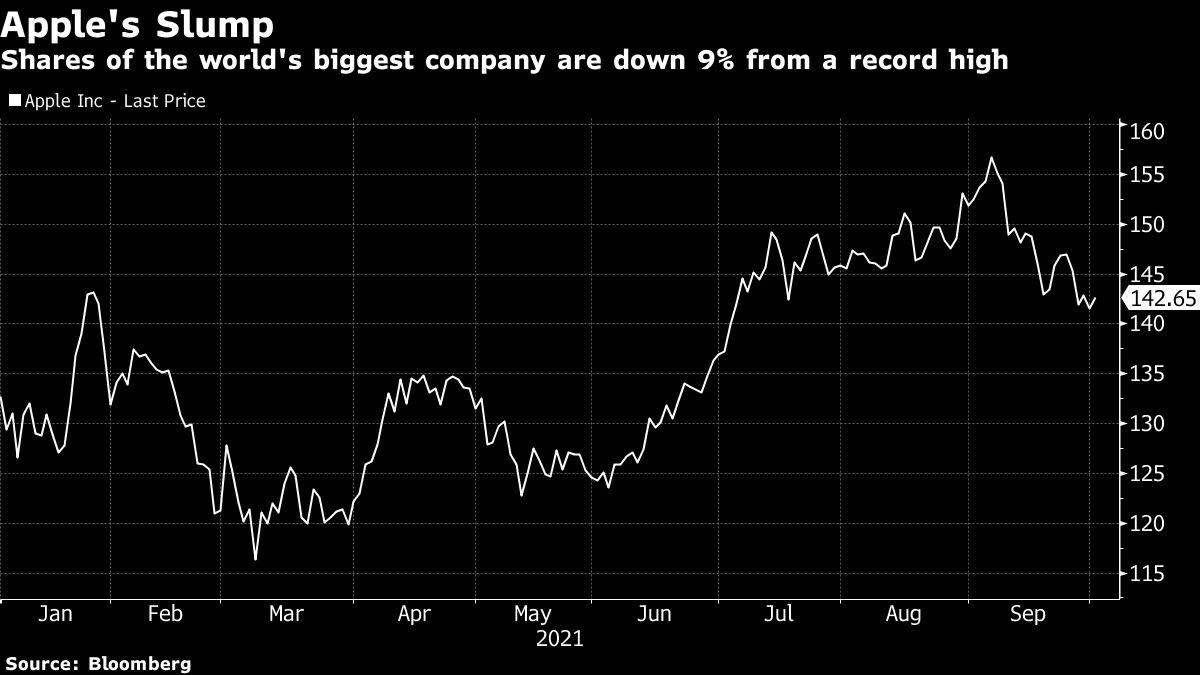 
(Bloomberg) — Megacap technology stocks rallied through a global pandemic, fears of a bubble and rising regulatory scrutiny. But the bond market could be the hurdle that finally trips them up.

Most Read from Bloomberg

Apple Inc., Microsoft Corp., Amazon.com Inc., Alphabet Inc. and Facebook Inc., the five largest U.S. companies, have delivered reliable outsized gains to shareholders for years. This week was different, as a selloff erased more than $300 billion from their combined market value and sent the Nasdaq 100 to its worst week since late February.

The reason? A sudden spike in Treasury yields that sent tremors through Wall Street, causing investors to flee stocks with the highest valuations because their distant earnings gains will be less valuable as rates rise. The moves exposed a rare vulnerability for tech giants, whose strong balance sheets, powerful profit engines and steady business models have kept them going through periods of tumult and transformed them into a quasi-safety trade.

Investors have been warning for months that U.S. bond yields were bound to rise with inflation climbing and the Federal Reserve preparing to rein in its asset purchases aimed at stimulating the economy. Now that those predictions are starting to come true, the big question on Wall Street is what kind of bond-market action could trigger more bleeding.

The 10-year Treasury yield rose above 1.5% on Monday, the first time it’s done so since June, and settled at 1.47% on Friday. Those rates are used to discount the value of future cash flows. The higher the yields go, the less those profits are worth now.

For Ted Mortonson, a technology strategist at Baird, the next important level to watch is the March closing high of 1.74%. A roughly 50 basis point advance in the yield in February helped fuel an 11% swoon in the Nasdaq 100 Stock Index and revisiting that level could play out in a similar fashion, he said.

“A lot of people are going to be making some major changes to their portfolios” if yields push past those levels, he said in an interview. “Money is going to keep rotating out of tech.”

Others argue the speed of the advance is the most critical factor. After trading in a roughly 10 basis point range for most of the past two months, the 10-year yield jumped more than 20 basis points in four days beginning on Sept. 23.

“The sharpness of the move on the Treasury yield caught the market off guard,” Keith Lerner, co-chief investment officer at Truist Advisory Services, said in an interview. He thinks it’s only a matter of time until the 10-year yield tests its March high. “The general direction is still higher, which I think means that tech will continue to struggle,” he said.

Of course, Wall Street remains overwhelmingly bullish on megacap tech. All 58 analysts who cover Amazon.com have buy ratings, despite the fact that its shares are now flat for the year. Apple, the second worst-performer in the group with a 7.5% advance since the start of the year, has buy ratings from three-quarters of analysts.

The five companies are each projected to report quarterly revenue growth of 16% or more in the upcoming earnings season, according to the average of analyst estimates compiled by Bloomberg. In particular, Apple, Alphabet and Facebook are expected to post more than 30% increases in revenues from the same period a year ago.

It’s that growth and earnings power that will continue to draw investors to tech megacaps even with higher interest rates, according to Anthony Saglimbene, global market strategist at Ameriprise Financial. He’s been advising clients to buy quality technology stocks on pullbacks. Many investors did just that on Friday, sending Microsoft and Alphabet shares up more than 2%.

Boston Partners’ Mullaney agrees to an extent, pointing out that big technology stocks have delivered profits that justify their lofty valuations and can continue to outperform even with higher rates if economic growth starts to wane.

“When people get scared about growth, they buy tech,” he said. “That is where you want to go for pure growth.”

Most Read from Bloomberg Businessweek

Jan 6 committee has subpoenaed witnesses: What happens when they don’t comply?