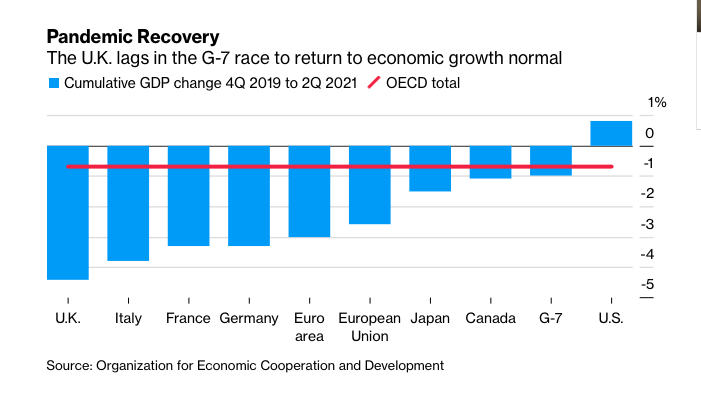 
UK’s in a tight spot

Bloomberg had an interesting piece this week outlining that the United Kingdom is facing a very challenging winter as a number of factors converge. A lack of labour, heating bills set to rise, and stores running out of goods are all the present reality for those in the UK. The situation could also get worse heading into winter and the Bank of England may have to address inflationary

pressures without upsetting the economy and rising interest rates too fast. In short, the UK is in a tight spot. Here is some of the detail.

The cumulative GDP change for the UK from Q4 2019 to Q2 2021 is slowest for the G-7. The UK’s Brexit policy is being seen as resulting in economic isolation for the UK right now. See chart below.

The real issue of labour shortages

This is probably the most pressing problem for the UK right now. A number of UK companies had been relying on cheaper foreign labour. The labour shortages are hitting all sorts of parts of the food supply chain. There is a shortage of people to pick/process food, pack the food, and then to deliver the food. Here is a snapshot of the people leaving the EU post the Brexit referendum. 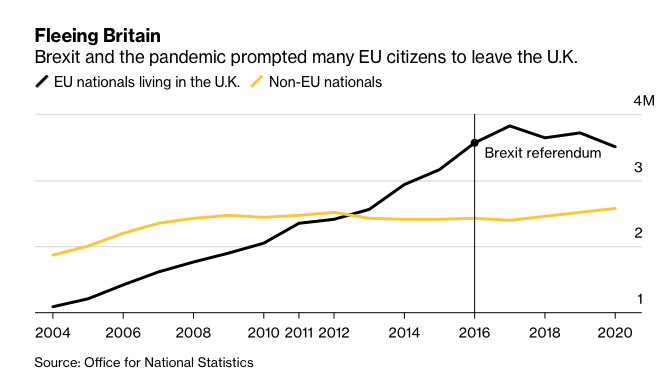 What can the UK do?

It can make work visas more readily available for migrant workers. The Department of Transport has done that recently and made 5,000 visa available to EU heavy goods drivers of food and fuel for three months. It has also relaxed the law for the number of hours worked from a maximum of nine hours to eleven. However, the British Retail Consortium say that this 5,000 is only about 35% of the drivers needed just for supermarkets alone to operate at full capacity ahead of Christmas. This led to Ruby McGregor-Smith, the president of the British Chambers of Commerce, saying the move was like, ‘throwing a thimble of water on a bonfire’. So, this means there is more scope for the UK to act, but politically this crosses against the Brexit manifesto of more jobs for UK nationals.

This is one story to watch. Brexit’s impact was jumbled up with COVID’s impact to give the UK a double whammy of trouble.These shortages shouldn’t be massively serious, but watch for inflationary pressure building and this forcing the UK chancellor to act quickly on interest rates. It could mean some unusual volatility in the the GBP over the next few weeks, so bear it in mind when trading the GBP. You can read the full piece here.