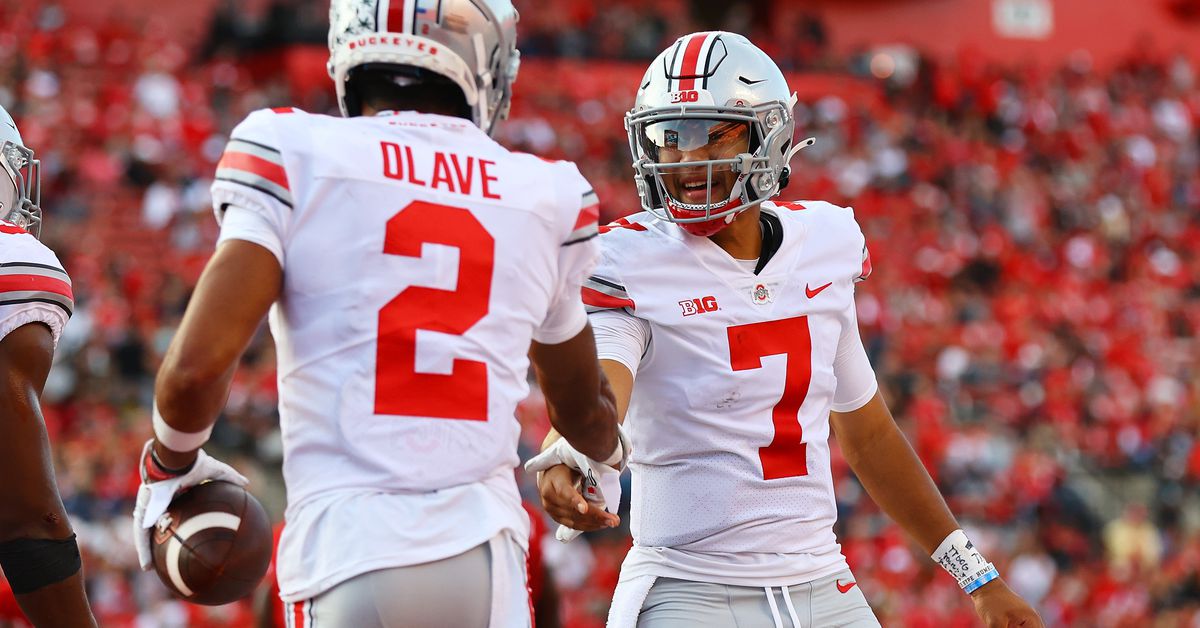 
After each Ohio State game during the 2021 football season, LGHL will offer its market analysis of the Buckeyes’ performance. Using a standard bond rating system, we’ll evaluate the offense, the defense, and the special teams, according to this formula:

Then, we’ll take a look at any individual players whose performance stood out (in one way or another!) and assign them a stock rating: Blue Chip, Solid Performance, Penny Stock (akin to a junk bond, dangerously high risk).

Finally. A complete game. A blowout. And against a team not called Akron. All week we heard about how this Rutgers team is different from the other seven who fell mightily to the Buckeyes since the Scarlet Knights joined the Big Ten. They didn’t look that different yesterday. After watching Iowa beat Maryland and Michigan beat Wisconsin, I was impressed again just how important quarterback play and turnovers are to the final outcome of a football game. C.J. Stroud was superb for the Buckeyes, the offense didn’t turn the ball over, and the defense picked off three Rutgers passes. An easy win. In the first quarter, after the failed fake punt, the 44-yard TreVeyon Henderson touchdown run, and the Denzel Burke pick-six, it was over at the 11:33 mark. I had a couple of concerns – and I’ll raise them below as I discuss the offense and defense – but, overall, it was quite a satisfying win, one that makes it look as though the Buckeyes really are back on track.

Aside from the short drive to end the first half, when Marcus Crowley was simply running the ball to wind down the clock, Ohio State scored on every possession led by Stroud. And there were seven others: six touchdowns and a field goal, the field goal coming as a disappointment. When a team cannot stop your offense – and make no mistake, Rutgers couldn’t stop the Buckeyes – you’ll win.

The Bucks’ attack was balanced, with 208 rushing yards and 333 passing yards (541 total yards). They were successful in converting third downs, eight of thirteen for the game, and Stroud was perfect on his third-down passes. Henderson, used sparingly for the second consecutive week, was electrifying early on; Teague and Crowley continued the run game well, after Henderson took a seat. The receivers were great in running after the catch, a factor that makes OSU’s passing game so dangerous. Nobody wants to be chasing Olave, Wilson, or Smith-Njigba in the open field. And C.J. Stroud? He was magnificent. More below.

Once Stroud left the game, after the second half’s first possession, the OSU offense really slowed down. Probably nothing to worry about, with the score a comfortable 52-6, but I need to point out a few things. After that point, Ohio State was outgained and outscored by the Scarlet Knights. I realize that the Bucks were playing backups at that point, but so was Rutgers. And one would hope that Ohio State’s bench is deeper by far than Rutgers’. And I know that OSU took the foot off the gas pedal. McCord and Miller threw only four passes between them, and the called plays provided nothing fancy. Still. OSU’s three punts, the one sack they had, and several of the penalties all occurred in this stretch of the game. Two holding calls against Donovan Jackson (yes, a true freshman) and Enokk Vimahi effectively ended McCord’s first drive. And the sack ended his second. It’s good to get these guys into the game, but they looked a bit sloppy – especially after the efficiency of the Stroud drives.

Two strong games in a row, and we now have hope (high hopes?) for the Buckeye defense. Rutgers could never really run on Ohio State, accumulating only 37 rushing yards in the first half, 111 for the game. And, though the Scarlet Knights put up 231 passing yards, the routes were almost all to the flats, right and left, with blockers out front. They didn’t go deep, perhaps knowing that Vedral wouldn’t have time for long routes, that he needed to get the ball out quickly.

Of those 231 passing yards, 75 came on one play in the first quarter. A corner blitz left Ronnie Hickman man to man on the Knights’ Aron Cruickshank, a dangerous kick returner and one of the fastest runners in college football. Hickman played a great game, but, whether you call him a linebacker or a safety, he’s not going to catch Cruickshank. It was the only really big play that the Bucks gave up.

The defensive line was again pretty good. They generally stuffed the run, and, while we’d like to see more than one sack, the pass rush was sufficient to alter the play-calling and to hurry the quarterbacks into those three interceptions.

The secondary continues to improve. Hickman, Burke, Cam Martinez, and Sevyn Banks all played well. The linebackers were where they were supposed to be, and the defense, overall, made few mistakes. Again, I think that there was a decline in the quality of play as backups entered the game (as I guess there should be). Everybody overran the play on Rutgers’ second touchdown, making for an easy cut back. There were more missed tackles, once the starters were out; linebacker Cade Kacherski missed a few.

There were a couple of good plays that the Buckeyes special teams made during the game. First, they were all over the fake punt attempt that ended the Knights’ first drive. That effort gave the offense a short field, and they made quick (two plays) work of it. Second, the special teams blocked an extra point attempt, helping to dowse any spark of momentum that Rutgers may have after that long touchdown. Ruggles made all of his kicks – a 23-yard field goal and seven extra points. Jesse Mirco punted three times for a decent 43.3 yard average, but none inside the twenty. We’d still like to see a long kick return!

C.J. Stroud: Stroud’s performance in this game should put an end to Ohio State’s alleged “quarterback controversy.” Yes, the Buck have a lot of guys in that QB room, but, to me, it surely looks as though Stroud’s the best. He finished the game 17 for 23 (74%) for 330 yards and five touchdowns, averaging a remarkable 14.3 yards per attempt. He spread the wealth around as Olave caught two touchdown passes, Wilson one, Ruckert one, and tight end playing up-back Mitch Rossi the other one. Stroud was especially accurate on third down plays and seemed to make good decisions throughout the game. Only one pass (nearly intercepted) looked errant to me. All in all, Stroud’s best performance so far. Maybe it was the shoulder, after all.

Chris Olave: About time. We’ve gone a couple of weeks now without our Olave. But he was sure there yesterday. Olave caught five passes for 119 yards (23.8 yard average) and two touchdowns. At least two of his catches were spectacular: a catch on the sideline where Olave went high and somehow got a foot in and the 56-yard catch and run for a 56-yard TD at the 3:24 mark of the second quarter.

Marcus Crowley: Oh, I know, Crowley’s performance wasn’t that of Stroud or Olave. But he carried the ball seven times for 58 yards and an 8.3 average (Henderson’s was 8.9 for the game), and he caught a pass for 21 yards. That’s a lot of productivity for a guy who’s a fourth string back and playing when everyone in the stadium is expecting a run. Nice game, Marcus!

Tyleik Williams: One of my favorite defensive players. He deserves most of the credit for the Ryan Watts interception, as he flattened Vedral just as he let go of the ball. Williams should be starting; he brings a real energy and determination to the line.

Denzel Burke: A pick-six will probably get a defensive back into this list, but Burke played a solid game throughout. He’s developing (quickly) into a top cover guy. And none too soon!

Ronnie Hickman: Yeah, it was Hickman’s man who scored on the 75-yard touchdown play, but it wasn’t his fault. Good play call against a blitz got the mismatch. Otherwise, Hickman was again all over the field, with a team-high 11 tackles. He’s quick and has a true instinct for the ball, something that we haven’t seen from Buckeye linebackers in a while.

Jeremy Ruckert: The big man has a knack for finding the open spot in the zone, particularly on crucial third-down plays. Ruckert has sure hands, and his size affords Stroud a visible target in the middle of the field. Ruckert finished the day with four catches for 40 yards and a touchdown. I’m thinking maybe that we’ll see more of Ruckert as a receiver in future games, though he’s also an outstanding blocker whether leading a play inside or sealing the outside.

The starting offensive line: Watching the game on TV, I can’t really focus on individual blocking because the camera follows the ball. But the line opened holes on running plays and protected Stroud on passing plays. Importantly, the committed few penalties. In previous games, holding calls or false starts would put the Buckeyes behind the sticks; this game was much cleaner.

No penny stocks this time around. As investments, everybody is performing pretty well.

If the Buckeyes keep playing like this, I’m guessing that we’ll see the turtles reduced to road kill next week.

Fuel issues persist in south but ‘over’ elsewhere

In 50 years, Walt Disney World went from $3.50 a ticket to a ‘luxury-priced destination’