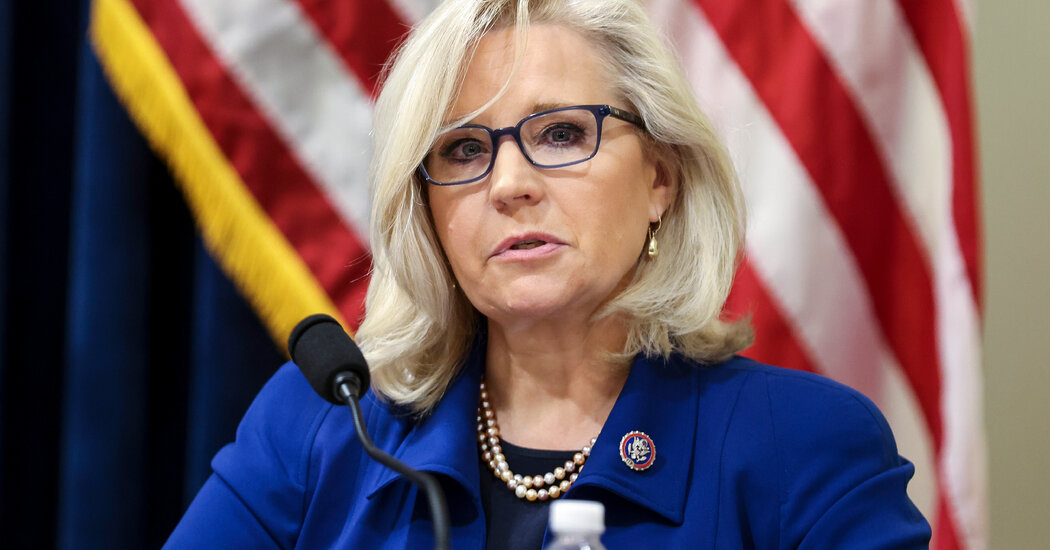 
WASHINGTON — House Democrats leading the investigation into the Jan. 6 attack on the Capitol by a pro-Trump mob named Representative Liz Cheney of Wyoming on Thursday as the committee’s vice chairwoman, elevating the role of a Republican who has been a vocal critic of former President Donald J. Trump’s lies about the 2020 election.

The announcement effectively makes Ms. Cheney the special committee’s second-ranking member, an unusual move for the majority party in the House, which typically grants that position to one of its own. But her appointment to the panel has been part of a break with convention from the start, given that Democrats nominated her and another Republican, Representative Adam Kinzinger of Illinois, in a bid to bring bipartisan credibility to an investigation that most other G.O.P. lawmakers had denounced and worked to thwart.

“Representative Cheney has demonstrated again and again her commitment to getting answers about Jan. 6, ensuring accountability, and doing whatever it takes to protect democracy for the American people,” Representative Bennie Thompson, Democrat of Mississippi and the committee chairman, said in a statement announcing the move. “Her leadership and insights have shaped the early work of the select committee and this appointment underscores the bipartisan nature of this effort.”

It comes as the special committee is ramping up its investigation into the violence that engulfed the Capitol as supporters of Mr. Trump stormed the building in his name, brutalizing police officers and delaying for hours the official counting of electoral votes to formalize President Biden’s victory.

The committee sent record preservation demands this week to 35 technology firms naming hundreds of people whose records they might want to review, including 11 of Mr. Trump’s most ardent allies in Congress, according to several people familiar with the documents who were not authorized to speak about its contents.

Representative Kevin McCarthy of California, the House Republican leader, has threatened to retaliate against any company that complies with the request.

Mr. McCarthy led the charge to strip Ms. Cheney of her Republican leadership post over her continued denunciation of Mr. Trump’s attempts to overturn the results of the 2020 election. This week, Representative Andy Biggs, Republican of Arizona and leader of the ultraconservative Freedom Caucus, circulated a letter calling on Mr. McCarthy to expel both Ms. Cheney, a staunch conservative whose father served as vice president, and Mr. Kinzinger from the Republican conference.

House Republicans voted on May 12 to oust Representative Liz Cheney of Wyoming from their leadership ranks for her refusal to stay quiet about President Donald J. Trump’s election lies.

“Congresswoman Cheney and Congressman Kinzinger are two spies for the Democrats that we currently invite to the meetings, despite our inability to trust them,” Mr. Biggs wrote in the letter, a copy of which was obtained by The New York Times.

Mr. Biggs, who promoted false claims of widespread election rigging in the run-up to the Jan. 6 attack, is among the Republicans whose social media and phone records the select committee is seeking to preserve. In his letter, he proposed changing rules for the Republican caucus to expel any member who accepts a committee assignment from Democrats, a step that Mr. McCarthy has suggested in the past would be appropriate.

“We cannot trust these members to sit in our Republican conference meetings while we plan our defense against the Democrats,” Mr. Biggs wrote.

Ms. Cheney said in a statement that she was pleased to accept the post as the committee’s No. 2.

“Every member of this committee is dedicated to conducting a nonpartisan, professional, and thorough investigation of all the relevant facts regarding Jan. 6 and the threat to our Constitution we faced that day,” Ms. Cheney said. “I have accepted the position of vice chair of the committee to assure that we achieve that goal. We owe it to the American people to investigate everything that led up to, and transpired on, Jan. 6th. We will not be deterred by threats or attempted obstruction and we will not rest until our task is complete.”

Top Gun and Mission: Impossible films delayed due to US Covid spike