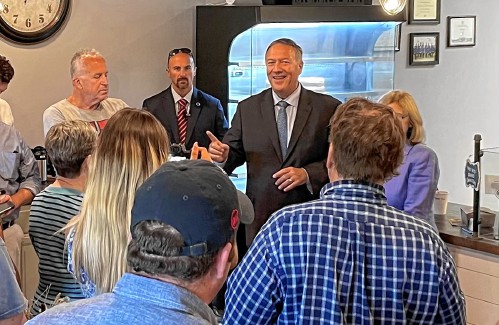 
Former Secretary of State Mike Pompeo had politics at the top of his agenda as he visited New Hampshire this week.

But the trip to the first-in-the-nation presidential primary state by the man who served as American’s top diplomat for the last two and a half years of President Donald Trump’s administration also sparked further speculation over a possible 2024 Republican presidential nomination run.

Pompeo shared top billing with another member of the Trump cabinet – former Education Secretary Betsy DeVos – at an event to kick off a national campaign to give parents expanded options for their children other than sending them to public schools.

The Tuesday gathering at the Bank of New Hampshire Stage in downtown Concord was sponsored by a conservative outside group called the Club for Growth. The event was held the day before a new law took effect that was passed by the GOP controlled New Hampshire House and Senate and signed into law by Republican Gov. Chris Sununu that offers education freedom scholarships to low and moderate-income families to send their children to private schools or home school programs rather than to their local public schools.

Pompeo also warned that American students are falling behind rival economic nations, blaming what he called the public education monopoly for causing “the complete absence of freedom in school choice for families.”

A couple of hours earlier Pompeo headlined a campaign event in Bedford for Linda Camarota, a Republican running in an upcoming special state representative election.

Pompeo, an Army veteran and former congressman from Kansas who served as CIA director and then America’s top diplomat in the Trump administration, has been crisscrossing the country in recent months, helping fellow Republicans running for office this year and in the 2022 midterm elections. He also launched a political action committee to help raise money for GOP contenders.

“We need leaders with a conservative understanding of America,” he said in an interview. “That’s why I’m here in New Hampshire. … I’m going to be working on behalf of Republican candidates who share my conservative belief system, try to help them have the resources, talent, organization and oomph they need to be successful in November of 2022.”

But Pompeo’s jam-packed one-day swing through New Hampshire is naturally sparking more speculation about his potential national ambitions in 2024. Pompeo’s teased a possible White House run and pundits see him as a potential contender for the GOP presidential nomination, especially if Trump doesn’t follow through on his flirtations and runs again in 2024.

Pompeo’s trip to the Granite State came after he already made two stops this year in Iowa, whose caucuses kick off the presidential nominating calendar, and one in South Carolina, which votes third in the GOP primaries and caucuses.

Pompeo started his day in Manchester, where he met privately with a group of influential Republican activists and leaders before headlining a state party luncheon.

Asked about 2024, Pompeo said in the interview that he’s working “really hard between now and November of next year. And then there’ll be some decisions that everyone has to make, including myself and my wife. And we’ll do that on the right timetable.”

The president stands at 44% approval and 55% disapproval in an online survey released this week by the Saint Anselm College Survey Center of 1,855 registered voters in New Hampshire. That’s a drop from Saint Anselm’s most recent survey, conducted in June, when Biden’s approval and disapproval each stood at 49%.

Biden’s approval ratings have been slipping in national polling and surveys in other states over the past couple of weeks as the president’s been heavily criticized by both Republicans and some Democrats for his handling of the turbulent American withdrawal and evacuation from Afghanistan, following the takeover of the war-torn central Asian nation by repressive Taliban forces.

The president, who’s repeatedly defended his actions, has been blamed for failing to prepare for the Taliban’s lighting fast takeover of Afghanistan amid the quick collapse last month of the U.S.-backed government and military.

The U.S airlifted more than 120,000 people, including more than 5,500 Americans, from the time the Taliban captured Kabul last month through the final departure of U.S. forces on August 30, which ended American’s two-decade involvement in Afghanistan. Amid the evacuation, ISIS-K, an affiliate of the Islamic State terrorist group, launched an attack on August 26 on Kabul’s international airport which left 13 U.S. troops and scores of Afghan civilians dead.

The poll, conducted by Saint Anselm’s New Hampshire Institute of Politics, questioned respondents Aug. 24 to 26, the two days before and during the horrific attack.

“Biden’s job approval has steadily declined since he took office in response to several challenges,” New Hampshire Institute of Politics executive director Neil Levesque said. “In this poll, he is bearing the responsibility for the current situation in Afghanistan (44%) more than his predecessors (Bush 27%, Trump 13%, and Obama 4%).”

The poll also indicated that Sununu currently enjoys an eight percent advantage over Sen. Maggie Hassan in a potential 2022 Senate face-off between the three-term Republican governor and his Democratic predecessor in the Corner Office, who’s running next year for reelection representing New Hampshire in the U.S. Senate.

According to the poll, 49% of registered voters would back Sununu in the hypothetical showdown, with 41% supporting Hassan, and one in ten choosing a different candidate or unsure.

Sununu held a six-point 47%-41% advantage over Hassan in March, the last time the Saint Anselm Survey Center polled on the Senate race.

The new survey indicated the expected partisan divide, with Republicans overwhelmingly backing Sununu and Democrats supporting Hassan. Sununu enjoyed a 50%-34% lead among independents in the poll.

Levesque highlighted the gender breakdown. “It’s worth noting that while males favor Sununu by a wide 55%-34% margin, he trails Hassan among women by only 2 points, 44%-46%,” he said.

The governor, who’s being heavily courted by national Republicans to challenge Hassan, has said he’s in no rush to decide whether to run for the Senate in 2022, run for reelection for a fourth two-year term as governor or not run for anything next year and return to the private sector.

Kuster, the five-term federal lawmaker from Hopkinton, had a 43%-42% approval/disapproval rating in the poll. Pappas, a two-term congressman from Manchester, stood at 42%-42% in the survey.

Saint Anselm said its polling sample was evenly divided between Democrats, Republicans and undeclared or independent voters. The survey’s sampling error was plus or minus 2.3 percentage points.

Revolution is coming: Markets are sleepwalking towards a made-in-China disaster

European regulator sees ‘no urgent need’ for COVID-19 boosters, aligning with WHO view and not the U.S.

Milley: Calls to China were `perfectly’ within scope of job

HNDL ETF: This 7% Yielding CEF Alternative Is Getting Bigger And Cheaper (NASDAQ:HNDL)