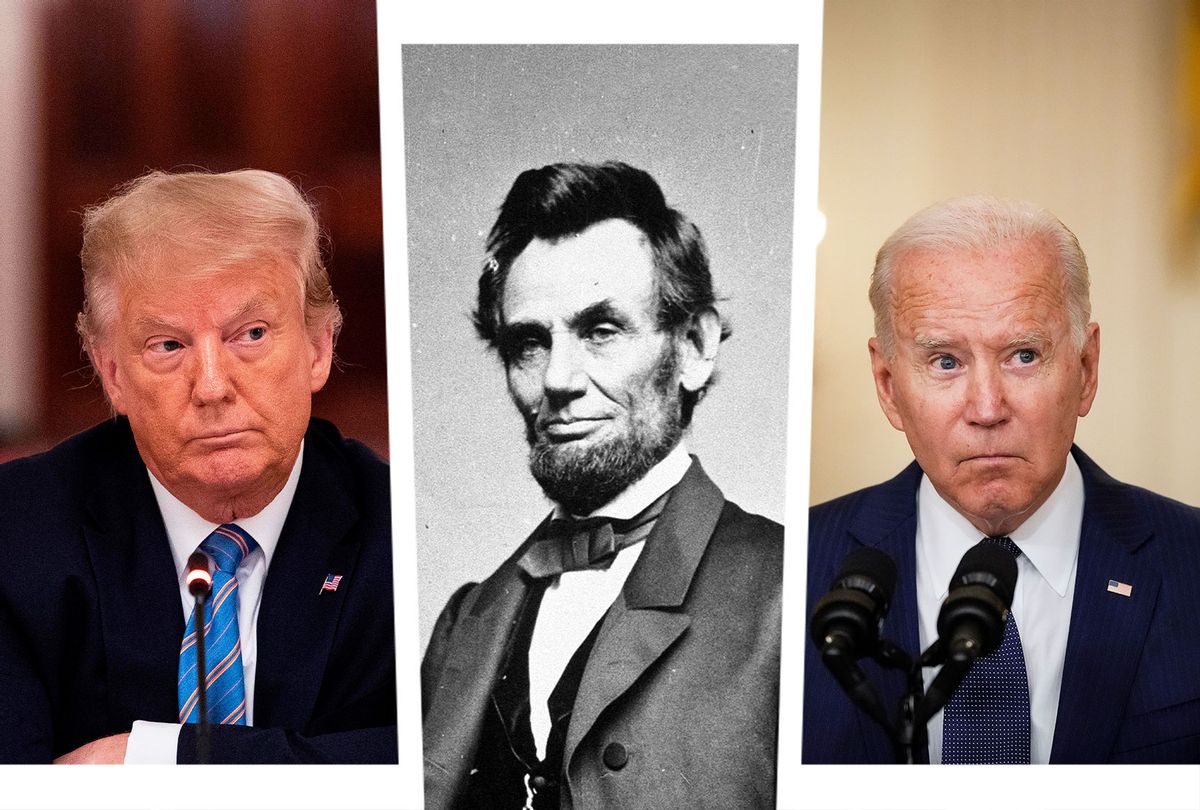 
Before Joe Biden defeated Donald Trump in 2020, only one presidential election had resulted in massive violence against the federal government. That of course was the election of 1860, which was as divisive as any in history and plunged the United States into the Civil War. This alone makes it difficult to claim a parallel with the 2020 election, despite Donald Trump’s repeated false assertions that he actually won. To this point, there are no signs of a bloody internecine conflict that ends with at least 620,000 deaths.

So in some ways, Trump’s Big Lie about the 2020 election is not as bad as the lies that caused the Civil War. In other very important ways, however, it’s much worse.

First, though, one must understand the 1860 election, which came at a political moment fraught with danger. Americans were divided as to whether slavery should be allowed into the newly-acquired western territories. Extremists in the South, sensing an opportunity to profit off human bondage in nascent industries, wanted no limits on when, where and how slavery could be expanded. While there were certainly some abolitionists who wanted to entirely eliminate slavery, mainstream “anti-slavery” forces mostly sought a compromise, where slavery would not be allowed to spread outside states where it was already legal.

Even that was too much for the pro-slavery forces, who were worried that anti-slavery states in Congress would eventually be able to outvote the slaveholder states and compel them to get rid of their “peculiar institution.” When the Whig Party disintegrated because it wouldn’t take a firm stance on the slavery issue, and the Republican Party rose from its ashes on a platform of barring slavery in the West, Southerners made it clear they were ready to secede if a Republican became president. The first time they made this threat, during the 1856 election, it proved unnecessary; Republican nominee John C. Frémont was decisively defeated by Democrat James Buchanan, even with former president Millard Fillmore potentially siphoning off votes on the xenophobic Know Nothing ticket. (Similarly Trump foreshadowed his 2020 actions by refusing to say if he would accept losing to Hillary Clinton in the 2016 election, although his victory rendered that threat moot and Clinton conceded right away.)

But the crisis came four years later, in 1860. Abraham Lincoln, the Republican nominee, got just under 40 percent of the popular vote, but that was enough to win against an opposition that was split three ways. The Democrats had fractured after nominating Stephen Douglas, who alienated both pro-slavery and anti-slavery forces by arguing that individual states should be allowed to decide the issue for themselves. Democrats who opposed slavery by and large fled to Lincoln, while pro-slavery Democrats nominated John Breckinridge as a third-party alternative. Further complicating matters, former Whigs who wanted to avoid the slavery issue altogether fielded their own candidate, John Bell.

Lincoln’s name didn’t even appear on the ballot in 10 Southern states, but he won large majorities of the vote across the North and won 18 states and 180 electoral votes. Breckinridge was a distant second in the electoral count, carrying 11 states but just 72 electoral votes, while Douglas finished second to Lincoln in the popular vote but only won one state. So Lincoln was the clear winner — and 11 Southern states ultimately followed through on their vow to secede from the Union.

I’ve previously written about Buchanan, a reasonable contender for the title of worst president ever. He was president throughout the 1860 election but wasn’t even up for re-election after Democrats refused to renominate him. Buchanan was openly sympathetic to the pro-slavery faction, blamed abolitionists for supposedly agitating the South and believed those states had a right to secede. Instead of working with President-elect Lincoln to try to stave off the wave of Southern secession, and perhaps prevent civil war, Buchanan made a point of doing nothing. His bitterness somewhat resembled Trump’s behavior after losing the 2020 election — but at least he wasn’t trying to stay in power himself. His actions were depraved and inept, but not literally dictatorial, and he didn’t try to gaslight the public with multiple false claims that the election was illegitimate.

Another important difference lies in the strong possibility that the 2020 election marks a direct setback for American democracy. When the fallout from the 1860 election was said and done, after a bloody four-year conflict, the franchise was actually expanded. The 15th Amendment explicitly extended the right to vote to Black men, including former slaves, and although it was not broadly or universally enforced for another full century, that at least marked a step in the right direction. Trump’s Big Lie, by contrast, has been used to justify a wave of voter suppression laws across the country, largely aimed at reducing ballot access for Black voters and other marginalized communities.

The United States has had 10 previous incumbent presidents lose elections, from John Adams all the way to George H.W. Bush. None of them were happy about it, but all of them accepted the legitimacy of their defeat. In violating this precedent and forcing his supporters to pass voter suppression laws that make Republican victories more likely in the future, Trump’s example has put democracy in dire peril. That may well be the chief legacy of the 2020 election.

There is one important way in which comparisons between the 1860 and 2020 elections are not yet clear. Lincoln was a moderate on the slavery issue who, in rough parallel to Biden, was depicted as a fire-breathing radical by his opponents. He eventually decided that the abolition of slavery was a righteous and necessary cost and took on that historical obligation, even if that meant “proving right” his pro-slavery critics. (That decision also very likely cost him his life.) Lincoln also expanded the federal government’s power to regulate the economy and vigorously prosecuted the war, even in the face of widespread protests by Confederate sympathizers in Northern cities. If your critics are going to accuse you of being extreme no matter what you do, he reasoned, there’s no longer any excuse not to do the right thing.

It took Lincoln rather too long, arguably, to learn that lesson, and Biden has likewise been absorbing it quite slowly, allowing his more ambitious programs to be watered down or jettisoned altogether by the resistance of “moderate” Democrats like Joe Manchin and Kyrsten Sinema.

None of these arguments cancel out the obvious ways in which the 1860 election had far worse consequences — at least to this point — than the one in 2020. Trump’s Big Lie seems unlikely to fuel hundreds of thousands of deaths, and try as they might, Republicans cannot literally roll back the clock to a time when women and people of color couldn’t vote at all, and when many of them were viewed as property. Even so, the fact that the comparison is not ridiculous is deeply troubling. We’ve had other controversial elections, from the tangled mess of 1876 to the Kennedy-Nixon nail-biter of 1960 to the “hanging chad” election of 2000, which was settled by a 5-4 Supreme Court decision. The 2020 election, in contrast, ought not to have been so divisive, and only became so because one man’s cult of personality was so powerful that his delusions created a malignant normality. Which of these two elections will ultimately be more destructive? It’s too early to know for certain; history will have to be the judge.