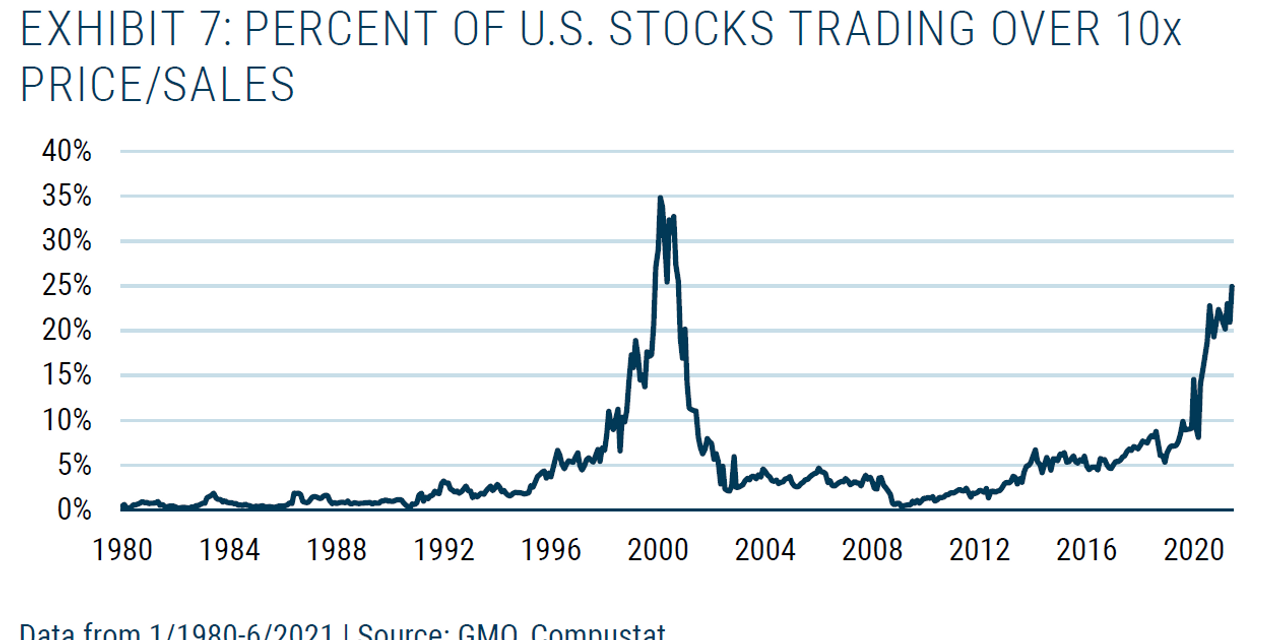 
We Americans invest more of our 401(k) plans in stocks than in any other asset class. In total we hold 39% of the money in stock funds, and another 26% in “target-date funds” that, depending on your age, allocate smaller or larger amounts to the stock market as well. Most of that is in the U.S. stock market and most of it in the large-company stocks in the S&P 500
SPY,
.
So arguably nothing matters as much for the retirement prospects of tens of millions of workers than the current level of the S&P 500, and its likely future returns.

Before anyone gets complacent, and dismisses talk of a stock market bubble, take a look at this killer chart, which comes courtesy of money managers GMO in Boston.

It shows that today fully one quarter of U.S. stocks are selling for more than 10 times annual sales — a generally ridiculous level of overvaluation. It’s not just that this is the highest percentage of stocks selling for silly prices since the infamous tech bubble 20 years ago. It’s that historically we have never seen anything like it other than during those two episodes: 1999-2001 and today.

This doesn’t mean that the entire U.S. stock market is in a bubble. It means that there is undeniable euphoria when it comes to the sexy ‘growth’ area of the market.
Ben Inker, the head of asset allocation at GMO and the author of the report, reminds us of just what “10 times sales” really means.

He quotes Scott McNealey, the CEO of Sun Microsystems, and his famous comments about it nearly 20 years ago, after the last tech bubble burst.

“Two years ago we were selling at 10 times revenues,” McNealey said in 2002. He talked through the impossible financial feats Sun would have had to perform to justify that stock price. “Do you realize how ridiculous those basic assumptions are?,” he asked investors. “What were you thinking?”

It was a good question. It still is.

GMO shows that, going back to 1980, stocks purchased at more than 10 times annual sales have overall been terrible investments, earning half the annual return of the overall S&P 500.

The late, great investment manager Peter Bennett used to say that a knowledge of financial history was even more important than a knowledge of financial theory. One reason: Stock market fashions go in cycles, they always have, and during each period investors insist the current fashion is permanent. (If they didn’t they wouldn’t buy the shares, after all).

Stocks generally fall into two categories, ‘growth’ and ‘value.’ (I sometimes think of them as ‘future’ stocks and ‘present’ stocks). So-called growth stocks are generally more expensive in relation to current sales, earnings and so forth because investors are betting on big things in the future. As with anything, you can pay too much. Everything has a price.

Right now we’re in a growth stock mania. The valuation gap between growth stocks and ‘value’ stocks is at near record levels, GMO data show. We’re not quite at the 1999-2000 levels, but we’re close.

Growth stocks have beaten value stocks by a wide margin over the past 15 years. But GMO analysis, echoing that of hedge-fund manager Cliff Asness, finds that this outperformance is entirely due to changes in valuation. Growth stocks have simply become much more expensive. To extrapolate that into the future is to engage in double counting, or circular reasoning.

Incidentally I should give a shout-out here to GMO co-founder Jeremy Grantham, who is too often dismissed as a “perma-bear.” In 2007, when ‘value’ stocks were booming and ‘growth’ was still in the doghouse from the dot-com bust, I met Grantham at an industry dinner. He told me then, presciently, that growth stocks that looked cheap. A terrific call.

It’s worth remembering at this point that the stock market is a giant, ongoing experiment in crowd psychology. Fashions and fads come and go. Human beings, after all, are merely the third branch of the chimpanzee family, and chimps are pack animals. To gamble that growth stocks will continue to outperform is, as Ben Inker argues, to gamble on multiple implausible mathematical assumptions. But it’s also to argue that human beings have stopped being subject to fashion and pack behavior on the stock market — a very long odds bet, I’d have thought.

We never know when the pendulum will swing back the other way. The past, of course, is no guarantee of future performance. But as a long-term investor here I’d rather own “value” stock funds than “growth” funds in my retirement accounts. I prefer the odds.