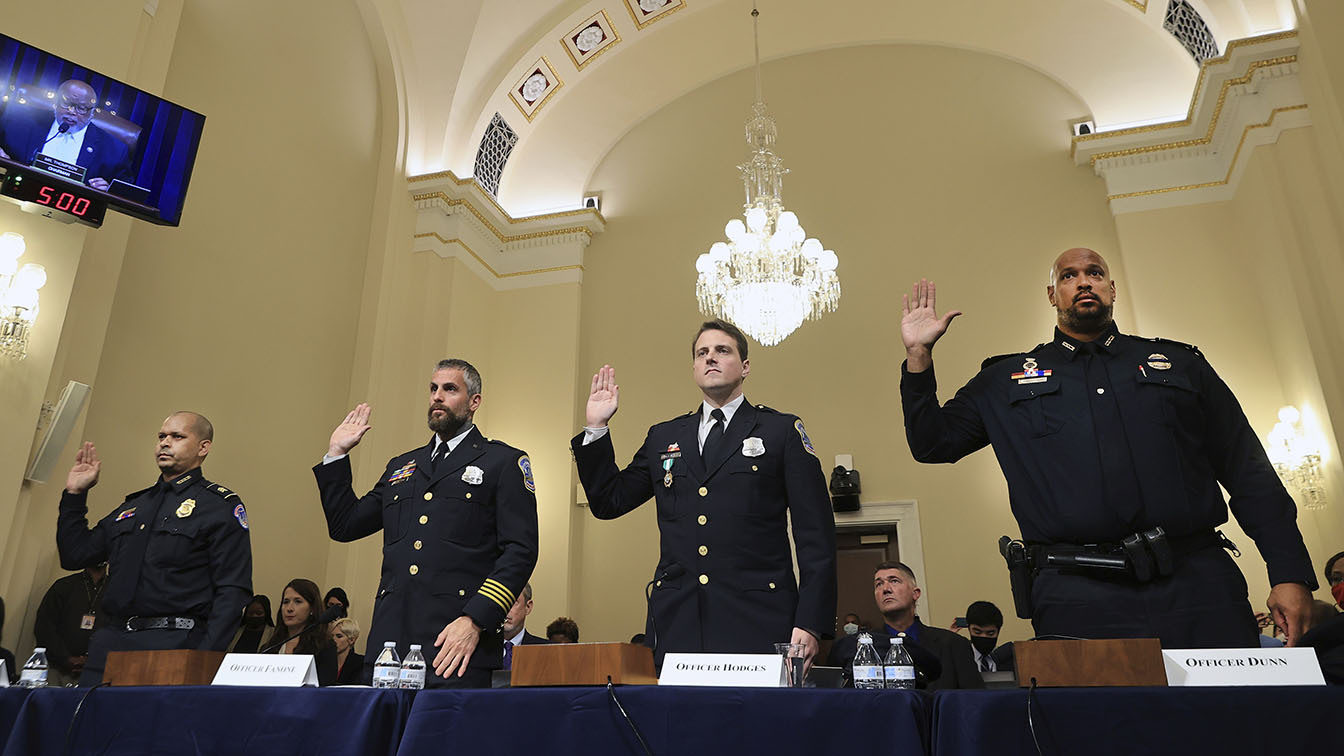 
A spokesperson for House Speaker Nancy Pelosi condemned former President Donald Trump’s recent statement threatening the officer who shot Capitol rioter Ashli Babbitt and called on House Minority Leader Kevin McCarthy to stand up to Republicans who continue to attack members of law enforcement who fought to protect the U.S. Capitol on Jan. 6.

“Enough is enough,” wrote Robyn Patterson, Pelosi’s deputy communications director, in a statement Thursday. “These attacks are disgusting, wrong and a wholly unacceptable way to treat the men and women who went through hell to protect our democracy from armed insurrectionists.”

Patterson was responding to a statement issued by Trump on Wednesday, in which he claimed that Babbitt, an Air Force veteran who was shot while trying to climb through the broken window of a door to the Speaker’s Lobby inside the U.S. Capitol on Jan. 6, was “murdered.”

“We know who he is,” Trump said of the U.S. Capitol Police officer who shot Babbitt. “The Radical Left haters cannot be allowed to get away with this. There must be justice!”

Babbitt was one of four Trump supporters who died after storming the U.S. Capitol building on Jan. 6 as Congress met to certify President Biden’s win in the 2020 election. She was almost immediately embraced as a martyr by the far-right.

In April, the Justice Department announced that its investigation into Babbitt’s death found insufficient evidence to support a criminal prosecution against the U.S. Capitol Police officer who shot her. Despite this, prominent Republicans, including Trump, have continued to promote the narrative that Babbitt was an innocent victim and patriot whose death was politically motivated. At a House Oversight Committee hearing in June, for example, Rep. Paul Gosar, R-Ariz., suggested that Babbitt had been “executed” and claimed that “the Capitol Police officer that did this shooting appeared to be hiding, lying in wait and then gave no warning before killing her.”

Patterson, Pelosi’s spokesperson, referenced Gosar’s comments in her statement Thursday, noting that “the former President’s threat against a U.S. Capitol Police officer is only the latest in a long line of vile Republican attacks on the officers who risked their lives to protect the U.S. Capitol on January 6th.”

“Officers present that day who have called out the partisan efforts to downplay a violent insurrection have been subjected to death threats and racist abuse,” she continued. “No member of House Republican leadership has bothered to condemn this harassment or speak out in support of these officers.”

“The brave law enforcement officers who defended the Capitol & Congress on January 6th deserve our deep gratitude and full support,” Cheney tweeted in response to Trump’s statement Thursday, adding, “Note for federal investigative agencies: the former president continues to use the same type of language he knows provoked violence in the past.”

Cheney previously served as chair of the House Republican Conference before she was removed from her position in May over her support for Trump’s second impeachment and public criticism of his false election fraud claims. She is now one of two Republicans serving on the House Select Committee to investigate Jan. 6.

More than 140 law enforcement officers were injured while defending the Capitol from violent insurrectionists on Jan. 6, and at least five died in the aftermath of the attack, including four officers who’ve committed suicide. In an effort to downplay the severity of violence, some conservatives have also sought to discredit other officers, like those who testified about the physical and verbal abuse they endured on Jan. 6 at the House Select Committee’s first public hearing.

One such attempt came from Greg Kelly, a host on the conservative cable network Newsmax, who suggested on Twitter during the first Select Committee hearing that D.C. Metropolitan Police Officer Michael Fanone may have been beaten by pro-Trump rioters because he “was mistaken for ANTIFA.” Kelly pointed to the fact that Fanone, who testified at the hearing in uniform, is often seen wearing black street clothes during media appearances.

This week, the National Fraternal Order of Police, the country’s largest police union, fired back at Kelly, calling his comments about Fanone “downright dangerous.”

“As law enforcement officers, we leave our personal politics at the stationhouse door,” the Fraternal Order of Police tweeted Wednesday in response to Kelly’s earlier post. “@gregkellyusa suggesting that hero Officer Fanone was mistaken for ANTIFA, despite the POLICE RIOT GEAR he was wearing, is downright dangerous. Don’t believe the lies being spewed by this clown.”