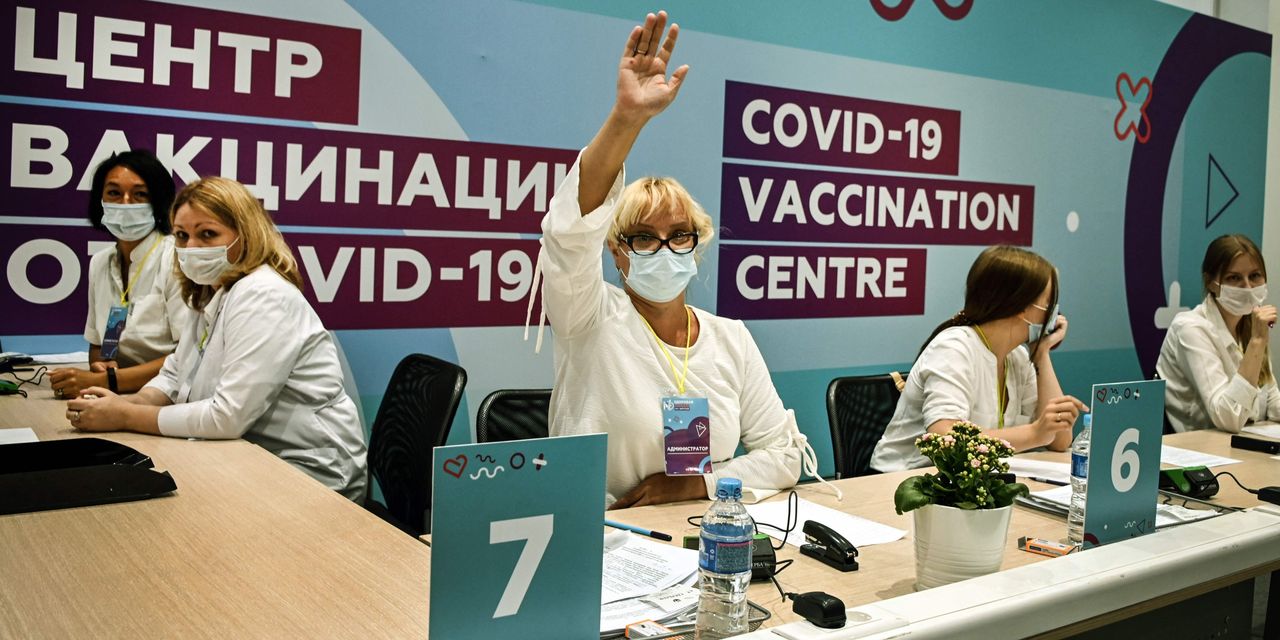 A flurry of positive medical news on the coronavirus-borne illness COVID-19 Tuesday was weighing against somber news from Russia, which recorded yet another record one-day death toll to cement its position as the European country with the highest number of fatalities.

submitted an amendment to the emergency-use authorization it’s seeking from the U.S. Food and Drug Administration for a booster shot of its COVID-19 vaccine. The amendment offered additional data showing the booster increased protection to 94% against moderate to severe or critical COVID-19 in patients aged 18 and older in the U.S.

It also includes Phase 1/2 data that shows a booster given six months after the single-dose vaccine increases antibody levels ninefold one week after administration that climbs to twelvefold higher four weeks after. J&J is planning to submit the data to other regulatory agencies and the World Health Organization.

said it has submitted an antibody drug for emergency authorization in the U.S., after clinical trials showed it was 77% effective in preventing symptomatic COVID-19, Dow Jones Newswires reported. The drug, AZD7442, would be the first to be authorized for COVID-19 prevention, the company said in a statement Tuesday.

See also: ‘This is a profound game changer’: Merck’s antiviral pill cuts risk of COVID-19 hospitalization and death in half, data show

Russia counted 895 new COVID-19 deaths on Tuesday, the most since the start of the outbreak and continuing a streak of record daily death tolls, Reuters reported. The Kremlin is blaming the trend on the slow pace of vaccinations and a more virulent virus variant, delta.

“The numbers are really very bad, and this is indeed a cause for concern. The main reason is the insufficient level of vaccination,” said Kremlin spokesman Dmitry Peskov. Russia has fully vaccinated 42.2 million people out of 142 million and reportedly believes it needs to inoculate at least 35.9 million more to achieve collective immunity.

The U.S. is still averaging close to 2,000 COVID-19 deaths a day, according to a New York Times tracker, although hospitalizations and new cases are on the retreat after a surge in the summer months caused by the delta variant. Most deaths, cases and hospitalizations are in unvaccinated people, and experts continue to urge those people to get their shots.

See now: Are you allowed to ask your doctors and nurses if they’re vaccinated? And do they have to answer?

The Centers for Disease Control and Prevention’s vaccine tracker is showing that 185.8 million people living in America are fully vaccinated, equal to about 56% of the population, a number that has remained relatively static for weeks.

Read: U.S. COVID-19 cases and hospitalizations continue to decline, but experts lament preventable deaths that have pushed toll above 700,000

California has deployed National Guard troops to hospitals in rural north and central area of the state to help overwhelmed hospitals cope, the Guardian reported. The move has highlighted the disparities within the nation’s most populous state between those with easy access to vaccines and those without. agricultural heartland in the Central Valley and its sparse, rural north have case rates that are three or four times higher.

Elsewhere, Norway and Portugal are the latest countries to offer booster vaccine jabs to people aged 65 and older, the Guardian reported separately. The European Medicines Agency has recommended that people with weakened immune systems be offered a booster but has left it to individual countries to decide on other patient groups.

Don’t miss: How COVID-19 booster shots are good for business, and for the economy

India’s Supreme Court has ordered India’s disaster management agency to pay 50,000 rupees, about $671, to families of people who have died from COVID, the New York Times reported. India’s official toll from the pandemic is 449,260, although experts estimate that the true number of fatalities is far higher.

Australian Prime Minister Scott Morrison said his country will not be welcoming international tourists until 2022, because it will prioritize students and skilled migrant workers first, the Washington Post reported. The country last week set out plans to allow vaccinated citizens to return home from overseas.

The global tally for the coronavirus-borne illness climbed above 235.4 million on Tuesday, while the death toll rose above 4.8 million, according to data aggregated by Johns Hopkins University. The U.S. continues to lead the world with a total of 43.8 million cases and 703,285 deaths.

China, where the virus was first discovered late in 2019, has had 108,560 confirmed cases and 4,809 deaths, according to its official numbers, which are widely held to be massively underreported.

Tesla bucks market sell-off in past month, and Oppenheimer charts where stock heads next