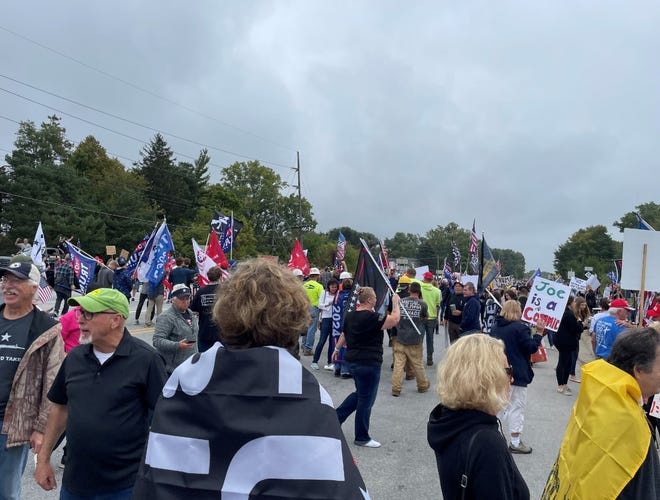 Proctor said he is interested in hearing what Biden has to say about his infrastructure plan.

“If it passes Congress we hope some comes our way, not just for the city but for our county,” he said.

Hundreds of people watched the presidential motorcade travel down M-59 around 2:15 p.m.

The crowd pushed its way into part of the road to get a look. Most were waving flags and yelling in opposition to the president’s policies.

After it passed, the road was filled with pedestrians for a few minutes.

Police got the crowd off the road and traffic resumed shortly after.

President Joe Biden has landed at Capital Region International Airport and was greeted by Lansing Mayor Andy Schor. The president is traveling by motorcade to Howell instead of taking Marine One because of potential bad weather, according to a press pool report.

Howell Police, the Livingston County Sheriff’s Office and Michigan State Police are coordinating with the Secret Service to provide security and traffic control for the event.

More than 100 people have gathered on all four corners of M-59 and Michigan Avenue to await the arrival of President Joe Biden, who is scheduled to give a speech in Howell this afternoon on his infrastructure bill and Build Back Better plans.

Most were there to protest the president’s policies or show support for former President Donald Trump. They carried signs and hollered at passing motorists at the busy intersection.

Pam Schneider, a Howell resident, said she became more political around the time of the presidential election. She attended Tuesday’s protest holding a pro-Trump flag and another sign reading “Stop the Spending.”

“I came because I see what Biden’s doing to our country. He’s destroying our country,” Schneider said.

Henrietta Torrio showed up to support Biden’s plan and protest Trump. She wore a Trump mask altered with gold teeth.

“I’m an electrical engineer and I’m ready to build it back better. America is ready to be better. We have better people in office now, and honesty and dignity has been brought back to the White House,” Torrio said.

“I’m here to support President Biden and his policies. I care deeply about people and want to make sure everyone here is safe. I’m here in case something happens. I want to be there to help people if I need to, to keep people safe,” Sexton said.

All was quiet at the Operating Engineers 324 training center Tuesday morning prior to President Joe Biden’s visit. He’s expected to deliver remarks at the training center at 3:35 p.m..

Biden will land at the Capital Region International Airport at 1:20 p.m. this afternoon before making his way to Livingston County Spencer Hardy Airport around 2 p.m.

His visit aims to rally public support for the infrastructure bill and his Build Back Better agenda as the president’s legislative priorities are being reviewed by Congress, according to a White House news release.

The event is not open to the public.

The rally is scheduled to begin at 2 p.m. at the corner of M-59 and Michigan Ave. Attendees can start to gather around 10 a.m., Meghan Reckling, Livingston County Republican Party chair said in a Facebook post.

Reckling said Tuesday during the protest they organized the rally to let the President know local people have major concerns.

She said several people will give speeches around 2 p.m.

“People here in Livingston County understand Build Back Better has a lot of good things in it that would really help Livingston County including improving our internet infrastructure which is sorely lacking in our county and which our county commission had done nothing to take care of all these years, and also improving our roads,” Daubenmier said.

Howell Police, the Livingston County Sheriff’s Office and Michigan State Police are coordinating with the Secret Service to provide security and traffic control for the event.

This is Biden’s first trip to Livingston County.

The last member of the Biden administration to visit the county was Vice President Kamala Harris’ husband Doug Emhoff a year ago. Emhoff stopped at the Livingston County Democratic Party’s headquarters in Brighton during a campaign trip.

Check back for updates