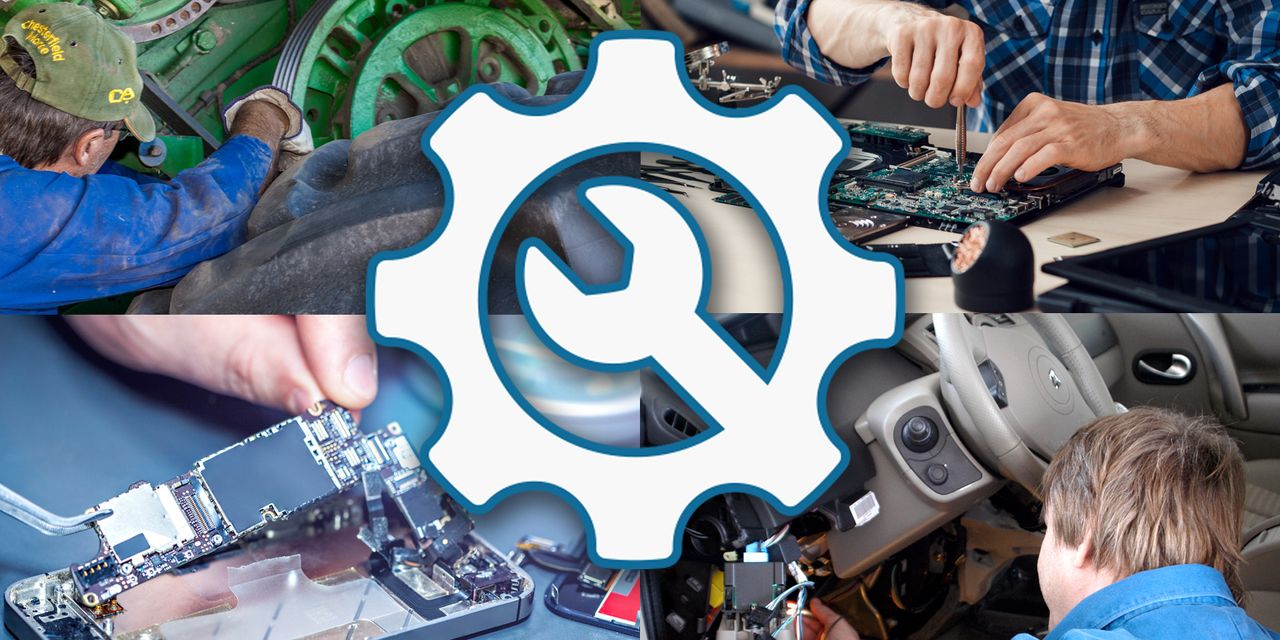 If you buy something today, what exactly are you buying? The answer could determine the path of a push to give Americans the “right to repair” possessions they have purchased.

For instance, if you buy an album on Apple Inc.’s
AAPL,

iTunes because you would rather “own” it than listen to it on a streaming service like Apple Music or Spotify Technology SA
SPOT,
,
it isn’t the same as buying a physical vinyl record, tape or CD. You’re only buying a digital license to the IP with its own rules as dictated by the contract you enter into with Apple.

That notion of a continuing contract between buyer and seller instead of the purchase of a physical good has become contentious with the rise of the right-to-repair movement. The intention is to give consumers the right to repair a product if it breaks, instead of being forced to buy a new one or pay the original manufacturer to repair it.

A Federal Trade Commission report released in June concluded that “there is scant evidence to support manufacturers’ justifications for repair restrictions.” The FTC is investigating the matter, as Biden requested in one of the most prominent executive orders issued early in his presidency.

There have been prominent examples of manufacturers selling expensive products and refusing to allow independent repairs on them. One of the most commonly cited examples has been John Deere & Co.
DE,
,
because farmers sued the farm-equipment maker for access to the software that ran their tractors and harvesters so they could repair the equipment. Recently, Deere said it supported a customer’s right to ownership and repair and that less than 2% of all repairs required a software update.

Another prominent example is Apple, which reserves the right to not sell parts and tools to repair personnel who do not work at Apple’s retail stores, and voids consumers’ warranties if they try to repair their own broken iPhones or MacBooks.

The issue, however, is a lot more widespread.

“Every industry has its Apples and its John Deeres, usually some dominant major manufacturer, but it’s in every industry,” Gay Gordon-Byrne, director of The Repair Association, told MarketWatch in an interview. “And there’s many, many more times bad guys than good guys.”

The Repair Association is a consumer advocacy group that grew out of the Motor Vehicle Owners’ Right to Repair Act passed in Massachusetts in late 2013, which required auto makers to supply repair shops and car owners with documents and information needed to make a repair. While right-to-repair for autos has not become law on a national level, the Massachusetts law prompted major auto makers to honor the state law on a national level through industry groups like the Alliance for Automotive Innovation and Autocare Association. The Massachusetts law was updated in 2020 through a referendum to include electronic vehicle data.

is absent from these associations, which were formed before the electric-car maker rose to its dominant position. More important, signatories involved car makers that have dealerships, and Tesla has argued it does not have “dealers.” Still, given Tesla’s reliance on software and a closed computerized ecosystem to run their cars, the company doesn’t seem too interested in joining the right-to-repair movement.

While some consider Teslas to pretty much be “iPhones on wheels,” that characterization sums up where a lot of the gray area remains on the right-to-repair debate: As products become more and more complex, where lies the boundary between being able to own a product unconditionally and do whatever you want with it, and purchasing the use of a product that carries with it a contractual obligation between seller and buyer that’s meant to protect both parties from harm and/or litigation?

Repair monopolies are easy for companies: Just do nothing

Consumer tech companies, especially those that make hardware like smartphones and PCs, have been a major reason why the right-to-repair movement has gained steam. In recent years, Apple has become a prime target in that it chooses who gets to repair your iPhone or MacBook and does not release parts or know-how to unauthorized parties. Apple has been criticized that its Genius Bar — after waiting to get an appointment — often charges close to or as much for a repair than what it would cost for a new product, when an independent repair shop often would be able to make the repair for less if parts and manuals were available.

Recently, The Wall Street Journal tried to get two water-damaged Apple laptops — a 2017 MacBook Pro and a 2020 MacBook Air — repaired. While independent repair shops were able to fix the 2017 machine for about a third of what Apple was charging, the 2020 model couldn’t be fixed because of a lack of parts or information, and Apple was charging about as much to repair it as it would to buy a new one.

“Repair monopolies, they’re just easy, manufacturers do nothing,” Gordon-Byrne told MarketWatch. “They have to do absolutely nothing to monopolize repair, which is why they all do it, because if your shareholders are saying ‘How come you’re not making more money here?’ the easiest thing you can do is ‘Well, I can fix that: I just won’t sell any parts, I won’t sell any tools, I’ll make everybody come to me for everything,’ and that’s where we are.”

Apple, however, went on the record before Congress In November 2019, telling to a House Judiciary Committee probe that it actually lost money on repair services: “For each year since 2009, the costs of providing repair services has exceeded the revenue generated by repairs.”

TechNet, an association that opposes right-to-repair legislation, has said the FTC should be working “with manufacturers to guarantee that those who are trusted to make repairs are able to do so safely, securely and correctly.”

“By upending an effective and secure system for consumers to repair products that they rely on for their health, safety and well-being, including phones, computers, fire alarms, medical devices and home security systems, the FTC will instigate far-reaching, permanent impacts on technology and cybersecurity,” TechNet said in a statement.

One field of exception in the right-to-repair argument appears to be laptops and PCs built by such companies as Dell Technologies Inc.
DELL,
,
HP Inc.
HPQ,
,
Lenovo Group Ltd.
992,

and Acer. They’re among the “good guys” in the manufacturing community, said Gordon-Byrne, but that’s mostly “because they’re manufacturing into a product category that is just widely commoditized.”

Right-to-repair is a noble idea, but…

While it seems natural to give consumers the right to do what they want with a product they’ve purchased, there are strong arguments against enshrining that right into law. Putting aside the argument that right-to-repair will jeopardize a company’s intellectual property and lead to consumer harm — and company liability — from faulty repairs, there appears to be a more fundamental flaw to the right-to-repair argument.

“If you can go out and buy a flat-screen TV for $200, when it breaks, you throw it away, because it’ll cost you several hundred just to fix it even if you can find anyone who can do it,” O’Donnell said. In the case of a car, however, most repairs are going to cost much less than the cost of replacing the car, he said.

“Consumer electronics is not in that situation,” O’Donnell said. “We’ve gotten the process to a point where it’s so cheap to make them that you just throw them away. Plus, there aren’t a lot of replaceable parts in them anyway.” Even if you wanted to buy those replacement parts, most of the components that go into consumer electronics are sold wholesale to original equipment manufacturers, as there isn’t enough retail demand to justify that type of market.

According to the U.S. Bureau of Labor Statistics, while the consumer-price index of a total basket of items grew nearly 48% from 1998 to 2015, the CPI for personal computers and peripheral equipment dropped 96% over that time, televisions fell 94%, and photographic/audio equipment fell about 60%. Notably, internet-service-provider prices only declined 24%, while prices for cable and satellite TV soared 80% over that time.

Those numbers appear to back a trend that physical products are becoming conduits for services rather than stand-alone functional devices, a model best exemplified by the smartphone, which is basically a worthless, fancy hunk of metal and glass — or combination mp3 player, calculator and flashlight — until it’s connected to a service provider.

Plus, many modern products are part of a circular economy, where vendors buy back older electronics to refurbish them for a secondary market, O’ Donnell said. “Apple doesn’t want to repair these things,” he said.

“It’s a noble idea, but one that has significant limitations, and it’s not just economics,” O’Donnell said of the right-to-repair argument, noting that the technical complexity of modern-day products pose a challenge to the concept. As an example, O’Donnell said that if the Intel Corp.
INTC,

CPU in your computer gets fried, the component is so complicated that there’s no point of even trying to repair it.

“You’re not going to fix that, Intel can’t even fix that,” O’Donnell said “You have to pop it apart and go inside. It’s just not something that’s feasible to do, no matter how much you want to do it, no matter how much the government says you should do it, it’s just not possible, and other products like an iPhone have gotten to that same level of complexity.”

Welcome to the Everything-as-a-Service world

Plus, our concept of ownership has become a bit of an anachronism in an economy that has become more service-oriented than manufacturing-oriented.

More and more, corporations are “buying” capital equipment less and less, opting instead to lease equipment or pay for services on someone else’s equipment, with one of the best examples being networking equipment. Increasingly, tech companies sell less equipment and more Tech-as-a-Service.

to run their computer networks, whereas now, more companies are paying Cisco and companies like Cloudflare Inc.
NET,

O’Donnell said one of the earliest examples of this model is one that has existed for more than 50 years: Rolls-Royce’s “Power-by-the-Hour” aircraft engine business, where the company does not so much sell aircraft engines as it does engine maintenance contracts that are billed according to how many hours the engine has flown.

One of the main reasons the Rolls-Royce model became such a success is that no airline really cares about “owning” something as technically complicated — and high-maintenance, from a safety and regulatory perspective — as a jet engine. They’d prefer experts who know the product best to keep it in safe, working order until it’s time to switch it out for a newer model.

In many ways, common household products are becoming just as complicated — and sometimes as dangerous when not handled correctly — as jet engines. For instance, this is what happens when you puncture a phone battery. And as consumer devices become more connected with each other over the Internet, and more prone to remote hacks, and as vehicles become less dependent upon drivers, those stakes will only rise.

If the global economy continues to become more of a lending economy than a purchasing one, the “right” to repair a product we bought might seem anachronistic in a few years, or as niche a hobby as someone who pays thousands of dollars on a turntable with a vacuum-tube-based amplifier. Still, for consumers who want that right on a widespread level, many of these issues will be ones that the FTC will be confronting as they examine right-to-repair moving forward.

American Airlines, Alaska Airlines and JetBlue say all staff must be vaccinated