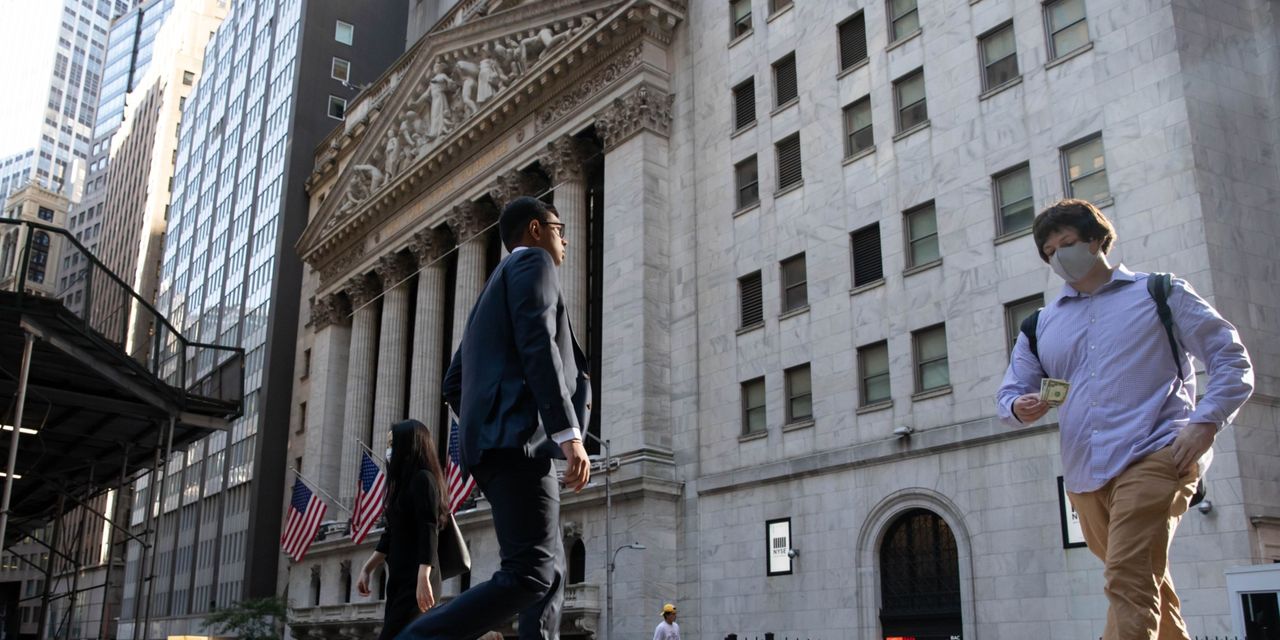 
This commentary was issued recently by money managers, research firms, and market newsletter writers and has been edited by Barron’s.

Market Perspective
Truist Advisory Services
Sept. 30: Stocks have seen a bumpier path in September, consistent with the typical seasonal weakness and our expectations. Entering October, choppy waters are likely to continue, given the ongoing political wrangling and debt-ceiling drama. That said, as we move later into the month, the seasonal backdrop should become more supportive. Moreover, we are encouraged by a sharp reset in investor expectations toward the economy, markets, and cyclical sectors, including small-caps.

Markets are all about how data come in relative to expectations, as opposed to whether data are good or bad on an absolute basis. Our work suggests this reset to investor expectations is setting the market up for positive surprises later in the fourth quarter. Thus, we would stick with the market’s primary uptrend and use any weakness over the coming weeks to position for further strength into year end.

Dollar’s Decline Is Under Way

Equity Market Outlook
Neuberger Berman
Sept. 29: The strategic decision to select stocks, sectors, factors, regions, and asset classes that benefit from reflation or disinflation tends to be among the most consequential for performance over a five- to 10-year horizon. An awareness of whether we are in a bull or bear cycle for the U.S. dollar can act as a useful guidepost. A bear cycle implies higher U.S. inflation, and a bull cycle, lower inflation, relative to the rest of the developed world. As such, U.S. dollar bear cycles tend to favor reflationary assets, regions, sectors, and factors, while bull cycles tend to favor allocations geared more to disinflation.

U.S. dollar cycles have tended to exhibit a cadence of seven to 10 years, and we think the dollar completed a nine-year bull run in March 2020 and has entered a multiyear bear market. Our view is supported by gross-domestic-product growth projections from the International Monetary Fund, which forecasts a decline in the U.S.’s proportional contribution to world GDP starting in 2022—another dynamic that has historically been associated with a weaker dollar.

Since at least the early 20th century, a weakening dollar and relatively stronger U.S. inflation have historically coincided with the outperformance of European over U.S. stocks, and emerging markets over the developed markets. Among U.S. sectors, traditionally reflationary sectors such as materials, energy, industrials, and financials have tended to outperform sectors such as consumer staples, healthcare, and communication services. The pattern typically holds outside of equity assets, as well: a weakening dollar tends to coincide with outperformance of gold over U.S. Treasuries, and industrial metals such as copper over gold.

Daily Insights
BCA Research
Sept. 29: U.S. financials is among the best- performing U.S. equity sectors over the past three months. We expect these positive relative gains to continue.

Financials will benefit from rising U.S. bond yields over the coming year. Not only are higher interest rates positive for financials’ net profit margins, but they also suggest a firm economic outlook. True, there are lingering uncertainties about the near-term economic outlook, but we expect supportive fundamentals stemming from healthy household balance sheets and the need for businesses to restock depleted inventories to propel the economic expansion over a 12- to -18-month period. These favorable conditions will allow the Federal Reserve to normalize economic policy. Thus, bond yields will be pressured higher—our fixed-income strategists expect the 10-year Treasury yield to rise to 2.0%-2.25% by the end of next year.

Valuations are also a tailwind. The sector is trading at a price/book ratio of 1.67, which is significantly below the broad market’s 4.67 and lower than the sector’s historical average valuation discount. BCA Research’s S&P Financials/S&P 500 Valuation Indicator is consistent with this message and shows that the sector is deep in undervalued territory.

Thus, we favor an overweight allocation to financials relative to the broad market. Given that financials are overrepresented in overseas bourses relative to U.S. indexes, an outperformance of this sector would be a tailwind for European equities relative to the U.S. Moreover, our European investment strategists recommend investors favor European banks vis-à-vis U.S. banks, as the former are trading at a steep valuation discount.

The Harley Market Letter
The Harley Market Letter
Sept. 28: The data source for residential real estate values is the Case-Shiller home price indexes. This set of indexes tracks the value of residential real estate in 20 metropolitan regions across the U.S….The [S&P CoreLogic Case-Shiller National Home Price Index] is published on the last Tuesday of each month with a two-month lag. Home prices in the U.S. are again making new all-time highs.

The latest data, released today, reflect national home prices through the end of July 2021. [The Index rose 19.7% in the year that ended in July.] Nationally, home prices continue to accelerate at a torrid pace. Price remains well above the 18-month moving average. The slope in monthly price is at an angle virtually unseen in modern times. My expectation for a major top in real estate prices remains the November-December 2022 time period. With interest rates near historic lows and an economy running on borrowed government money of epic proportions, the technical underpinnings remain solid for a continued rise in residential real estate prices nationwide.

What to Buy When Yields Rise

Blog
Heritage Capital
Sept. 27: I am going to oversimplify and say that when yields are rising and at 1.4% to 1.75%, value is preferred over growth and cyclical sectors over defensive. When yields are at 1.4% to 1.15% and not rising, growth is chosen over value and tech with defensive sectors are favored.

Furthermore, when long-term bond yields as measured by the 10-year Treasury note fall, the market is focused on slowing growth, but not necessarily slow growth or negative growth. In that environment, growth sectors, like technology, are very much favored. When the opposite occurs, sectors that do well when the economy is growing fast are favored. Those would be financials, materials, industrials, and energy.

Insight & Commentaries
Washington Crossing Advisors
Sept. 27: The combination of accelerating growth, near-zero interest rates, and soaring profits is not lost on the market. The total value of U.S. stocks is now over $51 trillion, a $16 trillion rise from a $35 trillion total valuation prepandemic. To put today’s $16 trillion advance in further perspective, recall that it took over 200 years—from the founding of the earliest U.S. stock exchange in 1790 to just before the 2007-09 financial crisis—for the U.S. stock market to create $16 trillion in value. The postpandemic rally is remarkable because of the magnitude of the gains and because the gains happened during a recession and global health crisis.

To be considered for this section, material, with the author’s name and address, should be sent to MarketWatch@barrons.com.