Trump, Biden, not on the ballot, but center stage in Virginia gubernatorial showdown 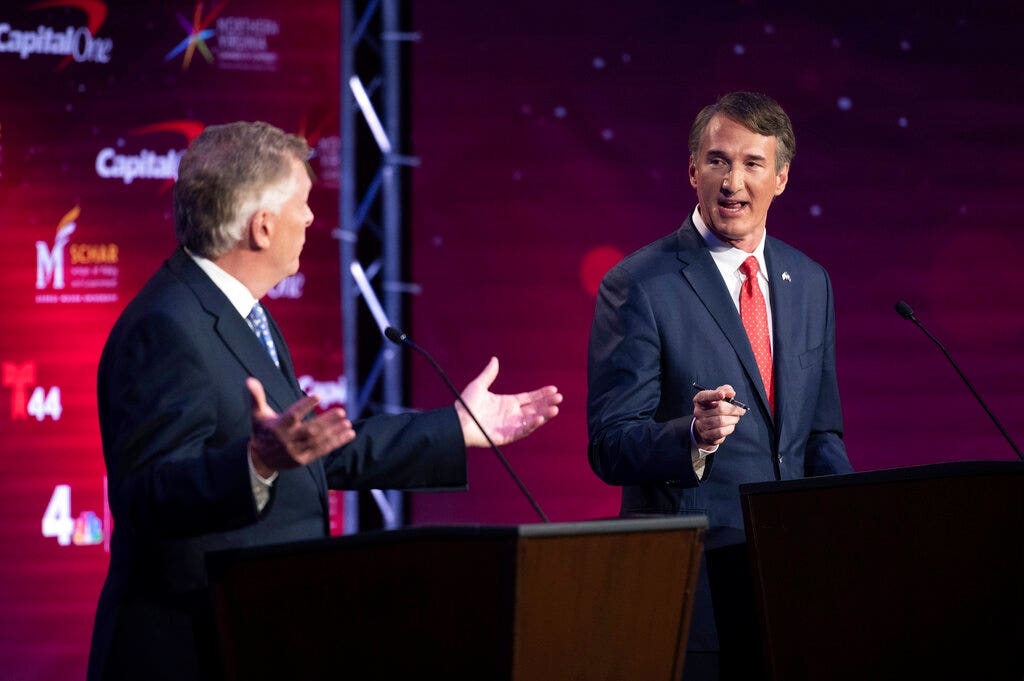 
President Biden and former President Trump aren’t on the ballot this November in Virginia, but they’re front and center on the campaign trail in one of just two states to hold gubernatorial elections in the year after a presidential election.

In a race between former Democratic Gov. Terry McAuliffe and Republican Glenn Youngkin, which the latest Fox News polling indicates is extremely competitive with just a month to go until Election Day, it’s no surprise that McAuliffe’s repeatedly trying to link the GOP nominee to the former president. Trump lost Virginia by 10 points to Biden in last November’s presidential election.

But Biden’s standing in the state has deteriorated, according to the Fox News poll and other surveys. The president’s flagging approval ratings, along with the inability of the White House and moderate and progressive congressional Democrats to agree on the party’s massive social spending and climate change agenda, may also be key factors in a close gubernatorial race with national implications.

Virginia has shifted blue over the past decade, and it’s been a dozen years since Republicans won a statewide election in the commonwealth. But it remains competitive, and the McAuliffe-Youngkin showdown is seen as a key barometer ahead of next year’s midterm elections, when control of Congress will be up for grabs

McAuliffe holds a four-point 48%-44% advantage over Youngkin, with 9% of Virginia voters undecided or backing someone else, according to a Fox News poll conducted Sept. 26-29 and released on Thursday.

“This benchmark survey of the Virginia governor’s race shows it is still up for grabs,” the poll’s release highlighted. “That four percentage-point edge is within the survey’s margin of sampling error and both candidates are below 50 percent support.”

According to the poll, Trump remains well underwater in Virginia, with a 41%-57% favorable/unfavorable rating.

McAuliffe has tried to tie Youngkin, the former CEO of a large private equity firm who’s been endorsed by Trump, to the former president in campaign commercials. And he continued his full-court press at last week’s second and final debate in the race, once again labeling Youngkin a “Trump wannabe.”

Youngkin responded to the effort by McAuliffe to portray him as a Trump clone with some humor.

“Terry, you just made folks in Las Vegas a lot of money,” Youngkin said. “There’s an over-under tonight on how many times you’re going to say ‘Donald Trump,’ and it was 10, and you just busted through it.”

Youngkin, a first-time candidate from the more moderate business wing of the GOP, courted Trump supporters to win the contested Republican nomination.

But during the debate, Youngkin disagreed with the former president when moderator Chuck Todd of NBC News asked about Trump’s unfounded claims that the 2020 presidential election was “rigged” and “stolen” from him.

“There wasn’t material fraud, and I believe that the election was certifiably fair,” Youngkin responded.

Trump remains very popular with Republican voters in Virginia and across the country, and extremely influential with GOP politicians as he continues to play a kingmaker’s role in the party and repeatedly teases another presidential run in 2024.

Asked if he’d support Trump in the next presidential election, Youngkin answered, “If he’s the Republican nominee, I’ll support him.”

The debate was held in the northern Virginia suburbs of Washington D.C., the fastest- growing part of the commonwealth and an area where Democrats have dominated in recent years, thanks to the shift of suburban voters away from the GOP during the Trump era.

As he runs to win his old job back – Virginia governors are barred from serving two consecutive terms – McAuliffe appears to be taking a page from the playbook of Democratic Gov. Gavin Newsom of California, who easily kept his job in last month’s gubernatorial recall election.

Part of Newsom’s strategy was to tie the Republican replacement candidates to the former president. Newsom’s job was made easier as conservative talk radio host Larry Elder zoomed to front-runner status among the replacement contenders in the final two months of the recall campaign and became the face of the unsuccessful push to oust the embattled Democratic governor. But what worked in California – a heavily blue state – may not play as well in a battleground like Virginia.

While more popular than Trump in Virginia, the president was treading water in the Fox News poll. Biden stood at 50% approval and 49% disapproval in the survey, with his favorable/unfavorable rating deadlocked at 49%.

The president’s sagging numbers came in the wake of Biden’s much criticized handling of the turbulent U.S. exit from Afghanistan. And it also came amid a surge in COVID cases this summer among mainly unvaccinated people due to the spread of the highly infectious delta variant, as the nation struggles to combat the coronavirus, the worst pandemic to strike the globe in a century. The plunge in the president’s approval was also compounded by the latest surge of migrants trying to cross into the U.S. along the southern border with Mexico.

While McAuliffe brought up Trump repeatedly in both of his debates with Youngkin, he didn’t appear to mention Biden’s name in either showdown.

The intra-party battle between progressives and moderate Democrats on Capitol Hill is also a contributing factor.

At Tuesday’s debate, McAuliffe appears to distance himself from his national party. When asked if he supports the $3.5 trillion spending package that the White House and congressional Democrats – who hold razor-thin majorities in both the House and Senate – are trying to pass along party lines using a parliamentary process known as reconciliation, McAuliffe said he thought the figure was “too high.”

But he urged Congress to pass the separate $1 trillion bipartisan infrastructure bill. “They’ve got to stop their little chitty-chat up there, and it’s time for them to pass it,” the former governor emphasized.

While Youngkin’s tried to keep plenty of daylight between himself and Trump, he and his campaign have shied away from using the president as a cudgel to take aim at McAuliffe, as they try to court independent voters who cast ballots for Biden last November.

The Virginia contest may be the first statewide test in a swing state of life without Trump on the ballot.

“As an off year election in a sometimes purple state, the Virginia gubernatorial is often seen as an early indicator of where voters are headed after a presidential,” said Democratic pollster Chris Anderson, who along with GOP pollster Daron Shaw conducts the Fox News poll. “And these poll results suggest Republicans might be more competitive in some places when Donald Trump is not on the ballot.”

Why NFTs can be a riskier investment than cryptocurrencies, report By Cointelegraph

Trump reveals for first time he got Pfizer vaccine