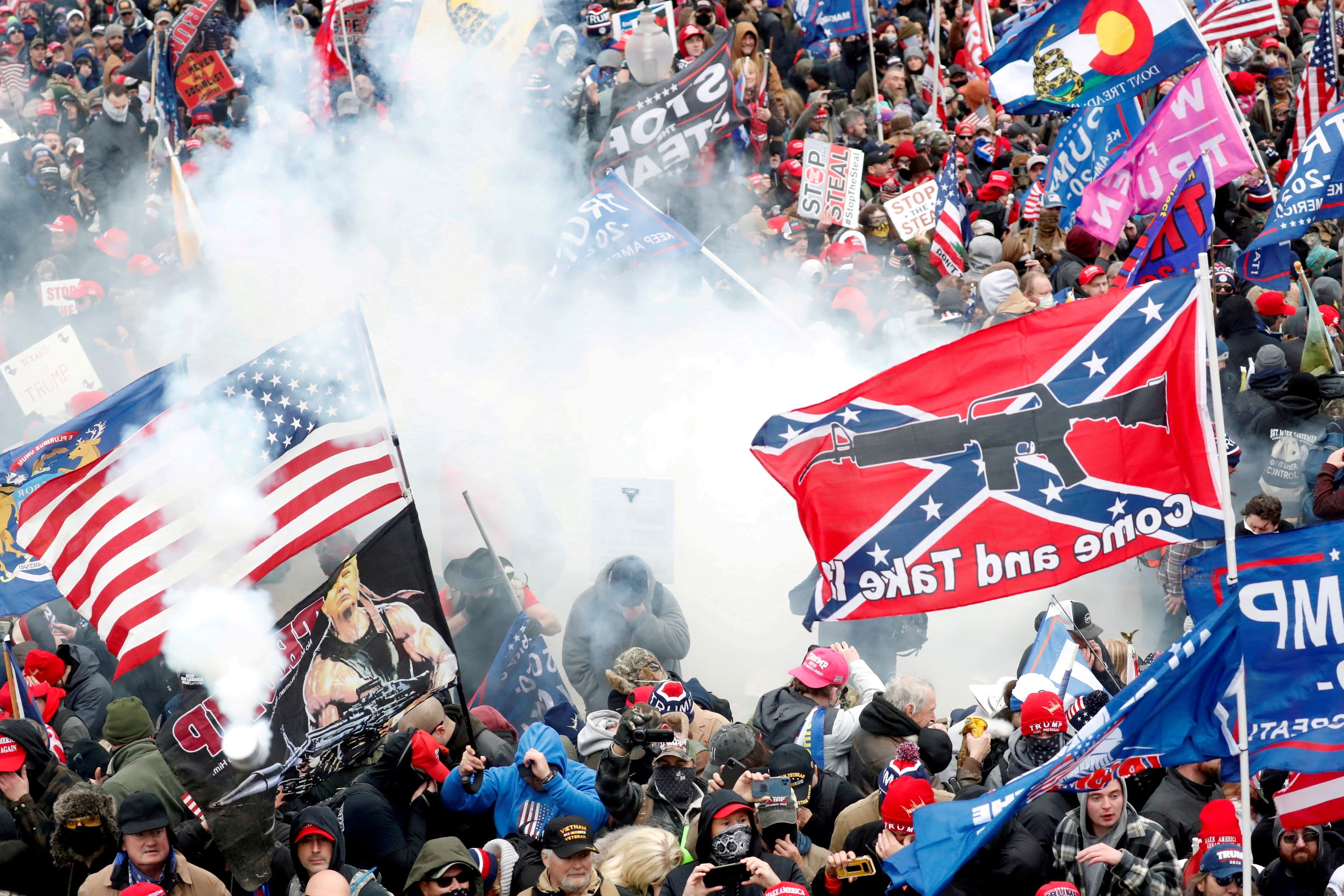 Tear gas is released into a crowd of protesters, with one wielding a Confederate battle flag that reads “Come and Take It,” during clashes with Capitol police at a rally to contest the certification of the 2020 U.S. presidential election results by the U.S. Congress, at the U.S. Capitol Building in Washington, U.S, January 6, 2021.

A federal appeals court on Thursday rejected President Donald Trump’s effort to block a House select committee from getting a tranche of White House records for its investigation of the Jan. 6 Capitol riot.

Trump is now poised to ask the Supreme Court to overturn the ruling.

He had argued that the records, which are held by the National Archives, are protected by executive privilege, the legal doctrine that protects White House documents from being made public.

In its ruling Thursday, the U.S. Court of Appeals for the District of Columbia Circuit said that Biden “and the Legislative Branch have shown a national interest in and pressing need for the prompt disclosure of these documents.”

Trump “has provided no basis for this court to override President Biden’s judgment and the agreement and accommodations worked out between the Political Branches over these documents,” the three-judge appeals panel said in its 68-page opinion.

That decision upheld the opinion of a lower federal court judge, who ruled last month that in disputes between current and former presidents, “the incumbent’s view is accorded greater weight.”

The appeals court’s unanimous opinion was written by Judge Patricia Millet, an appointee of President Barack Obama. Joining Millet in the ruling were Robert Wilkins, another Obama appointee, and Ketanji Brown Jackson, whom Biden appointed to the court. The assignment of three Democrat-appointed judges to the case was seen as an unlucky draw for Trump.

His lawyers now look to the Supreme Court, where Trump appointed three of the nine justices, to take up his case.

“Regardless of today’s decision by the the appeals court, this case was always destined for the Supreme Court,” said Liz Harrington, a spokeswoman for Trump, following the ruling.

The ruling gives Trump two weeks to ask the Supreme Court to take up his appeal before a court-ordered hold on the disputed records is lifted.

A lawyer for Trump did not immediately respond to CNBC’s request for comment on the ruling.

The decision comes a day after Trump’s former White House chief of staff Mark Meadows filed a lawsuit in Washington federal court that seeks to void two subpoenas issued by the committee. Trump, citing executive privilege, had ordered him not comply with the panel’s requests for documents and testimony,

The committee has vowed to move forward with its effort to hold Meadows in contempt for defying the subpoena. The panel will meet Monday evening to vote to advance contempt proceedings to the full House, which could lead to criminal charges.

Steve Bannon, Trump’s former White House senior advisor, was indicted last month on two counts of contempt of Congress over his defiance of the select committee’s subpoena. Bannon had also refused to comply based on Trump’s claims of privilege. Bannon has pleaded not guilty.

This is breaking news. Please check back for updates.