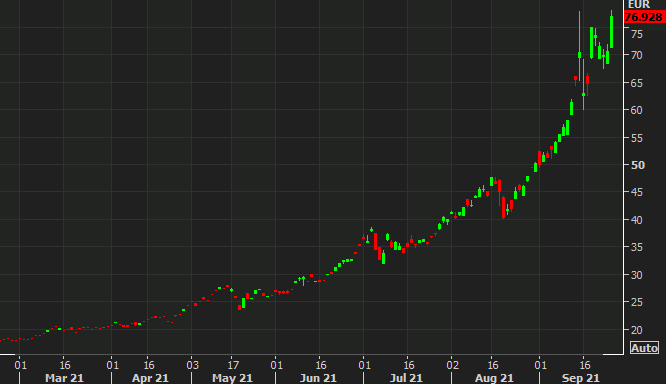 0 5
Share
Natural gas prices rise 11%UK and Dutch natural gas prices both closed up around 11% today to close at the highest settlement on record.There are a few big debates on right now:1) Does Russia actually have extra gas?The latest Russian domestic storage for gas data is from June but it showed domestic supplies very low then. Now, it could have since filled up and they're holding it back for Nordsteam 2 politics. Alternatively, Russia may not actually have extra capacity. Ominously, Russian oil exports have also faltered since June, despite all their OPEC+ protestations.2) The best thing I read this weekendI can't remember if it was Nomura or Credit Suisse but it's stuck with me. They said that the high prices now are a sign the market is trying to destroy demand, because if it doesn't and the winter is cold, there is a very real risk of running out of natural gas. Obviously. the results of that would be catastrophic. That's not necessarily
Subscribe or log in to read the rest of this content.
0 5
Share FacebookGoogle+Email

What happens if the U.S. defaults on its debt?

One month after Aboki FX shutdown, naira fails to rise