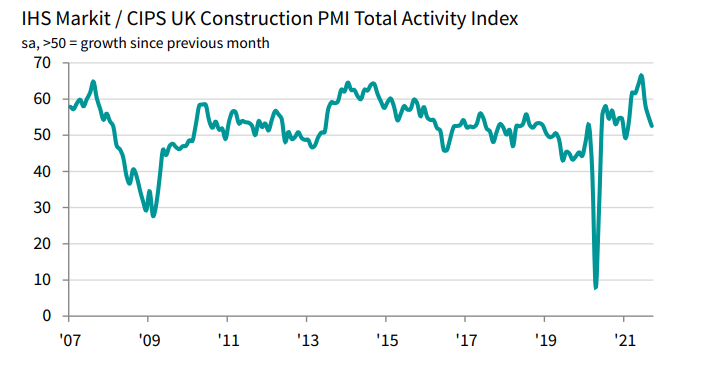 UK construction activity growth eased further once again in September, with output volumes seen rising at its smallest extent in eight months. Supply and capacity constraints remain the biggest issue, also leading to a surge in cost inflation. Markit notes that:
Invest in yourself. See our forex education hub.

“September data highlighted a severe loss of momentum
for the construction sector as labour shortages and the
supply chain crisis combined to disrupt activity on site.

“The volatile price and supply environment has started to
hinder new business intakes as construction companies
revised cost projections and some clients delayed decisions
on contract awards. As a result, the latest survey data
pointed to the worst month for order books since January’s
lockdown.

“Shortages of building materials and a lack of transport
capacity led to another rapid increase in purchase prices
during September. There was also a considerable decline in
the availability of sub-contractors, with survey respondents
citing shortages of bricklayers, drivers, groundworkers,
joiners, plumbers and many other skilled trades. Measured
overall, prices charged by sub-contractors increased at the
fastest rate since the survey began in April 1997.”