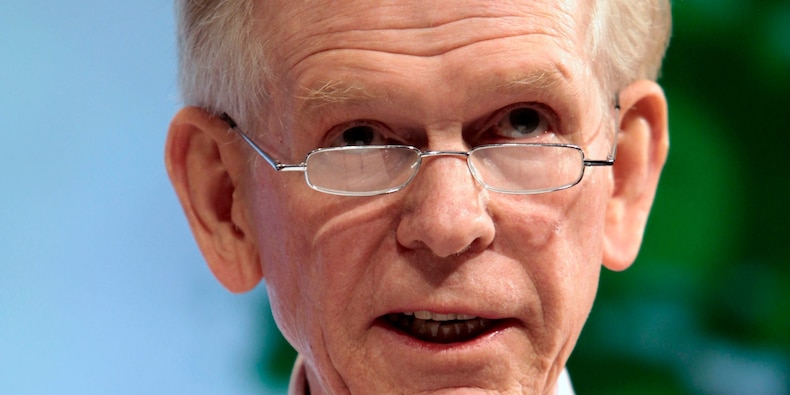 
Veteran investor Jeremy Grantham rang the alarm on an unprecedented market bubble in the US, bemoaned the meme-stock boom, and trumpeted overseas equities in a CNBC interview this week.

The GMO cofounder and chief investment strategist also flagged a global housing bubble, praised the US venture capital industry, and underlined the urgent need to tackle the climate crisis.

Here are Grantham’s 12 best quotes from the interview, lightly edited and condensed for clarity:

1. “This bubble is bigger than any before in the US. Real estate, bonds, stocks, and commodities are all overpriced.”

2. “US equities are in a magnificent bubble. Real estate is magnificently overpriced almost everywhere. The bond market is at a 6,000-year high in terms of low interest rates and high bond prices.”

3. “US house prices are at a higher multiple to family income today than at the peak of the housing bubble in 2006. The multiple is even higher in Australia, Canada, England, Hong Kong, Shanghai, you name it. This is a global housing bubble.”

4. “You knew last year this bubble was going to be the real McCoy, but you didn’t know if it was gonna break the next Wednesday, or a year later. One by one, we’ve checked off every condition that a glorious bubble needs in terms of crazy behavior. This has been crazier by a substantial margin than 1929 and 2000.” – Grantham warned the bubble could burst at any moment, and predicted US stocks would see double-digit losses within a matter of months.

5. “The end of a bubble is like killing off a vampire.” – noting investors are so optimistic that they’re shrugging off bad news such as the prospect of higher interest rates, the Federal Reserve tapering bond purchases, elevated inflation, and pressure on corporate profits.

6. “I do hold some gold and it’s not helping me much. It’s a strange creature, gold. Not as strange as bitcoin, but pretty darn strange, and I feel uncomfortable and always have owning it from time to time. I don’t heartily recommend it.”

7. “The problem in a broad, overpriced world like this is what the heck do you own? I would try and get some exposure to the green world and the VC world – not that they will escape completely, but they will bounce back so much bigger and better than almost anything else. The green side of the universe has an incredible wind behind it so own some of that, avoid the US like the plague otherwise.” – Grantham also touted Japanese and UK stocks and overseas value stocks as compelling investments.

8. “Our forecast is to have a negative return on US stocks over the next seven years. I strongly believe that will be accurate.”

9. “The meme stocks are just a travesty of serious investing. There was nothing that extreme in 1929, nothing like that in 2000. The dollar valuations were in the hundreds of millions, not tens of billions like the crazy SPACs this time. Not to mention all the bitcoins of the world which are a couple of trillion dollars, all based on confidence that other people will pay for what you have.” – Grantham highlighted QuantumScape, a battery startup he invested in that’s still four years away from selling any products, which went public late last year via a SPAC and briefly secured a valuation higher than General Motors.

10. “The US is extraordinarily powerful in venture capital. It raises a lot more money, it has a lot more enterprises. The quality of the whole industry is much higher, the society is more attuned to investing in risky enterprises and forgiving people who fail. The US has a death grip on the great research universities, which are critical to venture capital.”

11. “Venture capital is far and away the most healthy part of modern capitalism. It really does something useful. It’s in full cry, companies starting everywhere. Really important, promising, green technologies are springing out of the woodwork at all the great universities.”

12. “If we don’t address environmental issues, our society as we know it will start to crumble. The weather is going to hell; everybody is beginning to recognize the dangers of climate change. Greening the economy, decarbonizing the whole industrial system is the biggest challenge we have ever faced. It will take many trillions of dollars, and it will dominate the investment opportunities of the future in the public and private markets.” – Grantham blasted oil-and-gas executives for downplaying the climate crisis and potentially costing the world between 10 and 20 years of “absolutely precious time.”

Budowsky: House Dems should back Pelosi, here’s why