What’s Going on With the Job Market? | The Motley Fool 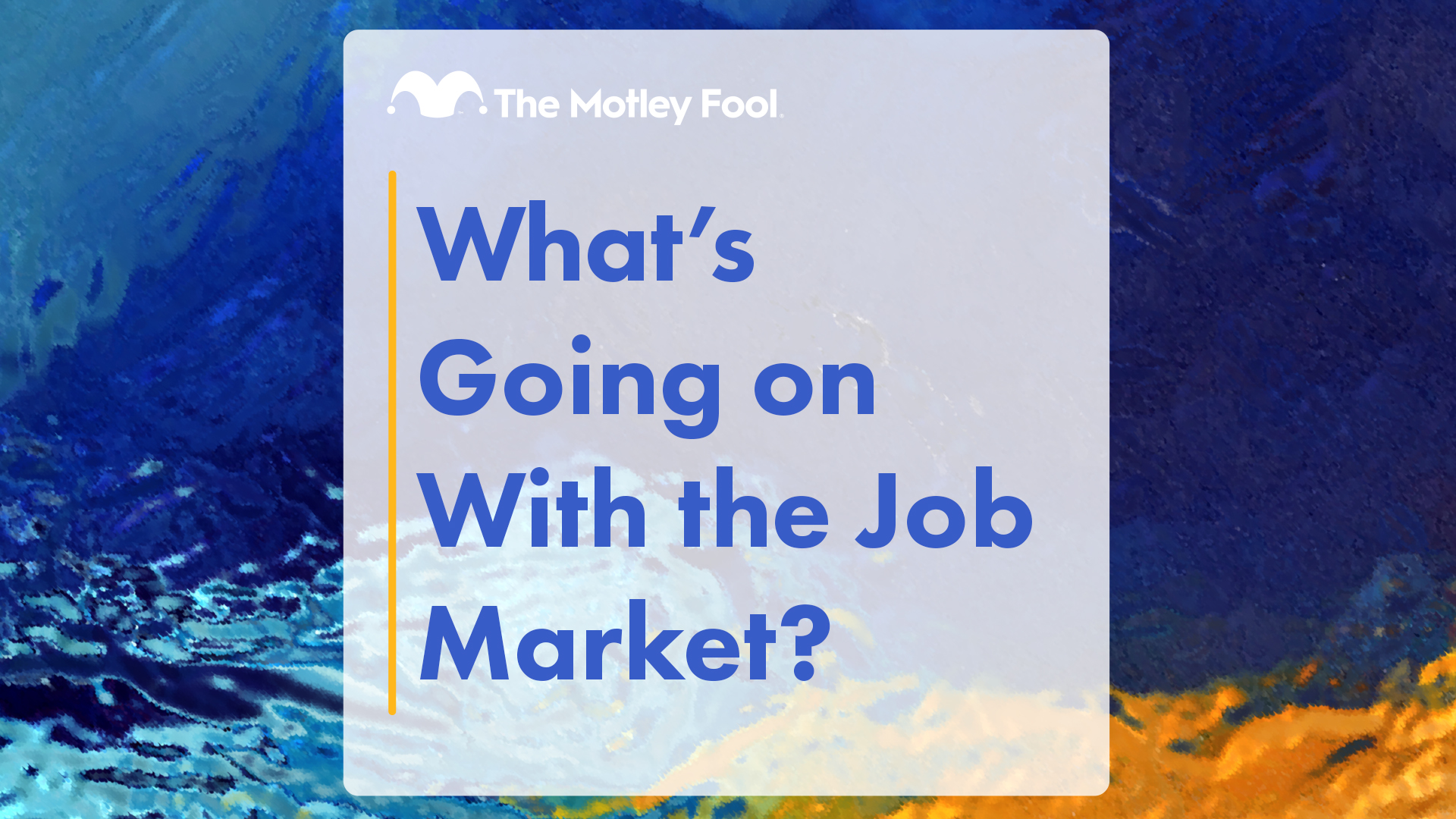 
Unemployment rates remain high even as businesses across the country are critically understaffed. Companies and their workers were forced to make drastic changes because of the coronavirus pandemic, and some may prove to be permanent.

In this video from “The 5” on Motley Fool Live, recorded on Sept. 23, Fool.com contributors Brian Withers, Toby Bordelon, and Demitri Kalogeropoulos share their thoughts on where workers are going.

Brian Withers: Unemployment, they released unemployment claims today — moving onto the second news item — and unemployment claims have ticked up a bit. I just wanted to share this slide from the St. Louis Fed. I love the Fred website. [laughs] This is such an amazing website. This serves economic data, so it’s fredstlouisfed.org and you can get all sorts of different data here. This is unemployment claims, weekly initial unemployment claims. You can see from the ’70s, ’80s, it was in the 200,000, 300,000, and obviously, during the coronavirus, things popped up a little bit. Let’s zoom in here. [laughs] This is crazy, right? 2010 to 2020, just a gradual downward decline of initial unemployment claims week over week, and then this huge bump up during the coronavirus, and then it’s steadily come down. But if you look at the number, this past week, I want to say it was 351,000, and if you look at the end of December here, where we’re talking 200,000 in weekly unemployment claims. We’re still quite a bit above the pre-coronavirus numbers and what’s a little crazy, this is sort of upside-down world a bit, the number of job openings is just huge. There’s a lot going on here, and so companies are also having trouble staffing positions. What’s your perspective on what’s going on with the job market today? We’ll start with that question first. Demitri.

Demitri Kalogeropoulos: Yeah, that’s a scary chart kind of look at. Thanks for the reminder. Kind of reminded me how in those days when the market dropped, I think 10% in one day back then, you kind of understand why — you have 5 million new job losses in one week.

Kalogeropoulos: That’s amazing. Yeah, I’ll give you an example of just today from my local area here. I went to my mailbox this morning, I live in northern Florida, a little bit south of Jacksonville, and I had a note in my mailbox saying that the city was halting recycling services indefinitely because it couldn’t get enough staffing to do that anymore and they had to reschedule a couple of times and they just kind of finally gave up, and they don’t know when they’re going to start that again when they told us to hold onto our little blue bins just in case whenever that happens. But it’s an example of what you’re talking about. Like you said, there’s obviously a whole lot of factors here, but kind of one that sticks out to me is sort of this, I guess call it changing priorities from the pandemic, just a wholesale of a lot of people making these decisions, voluntary decisions just sort of change or relocate.

A number that jumped out at me, I was playing around that website there, too, I love that website, too, you can spend hours on that site. But the number 2.7% of workers in July, which is the most recent data we have, quit their job, like voluntarily quit their job, which is kind of really close to a record, that number has gone up over the last couple of months. That’s kind of a telling story it looks like, and you look at some of the industries that are sort of elevated in that way, these are voluntary separations or are things like restaurants services, and hospitality for sure. Areas that have maybe longer hours or maybe physically demanding work, like my city services example. Then professional services is a big one, too, and I think I attribute that to be some of these people that are working in maybe a big metropolitan area and have to sort of commute and don’t want to be tied to the office and that commute. A lot of people have quit their jobs and are just not willing to go back, they’re being pickier, I guess, in going back into these industries. People got a taste for remote work and avoiding long commutes and in some cases moved out of city areas. I guess that’s one reason why the job market looks so weird right now.

Withers: Yeah, Demitri. I have seen some surveys that said not only have there been a bunch of people that have quit, if you ask the people who are employed today, there’s some 30% or 40%, there’s some large percentage of them who would leave if say the company forced them to go back in the office five days a week or they found a better job that was allowing them more flexibility. Certainly, the coronavirus has sort of made us all I guess step back a little bit and evaluate, is this job really what I want to do, day to day, right? Toby, what’s your perspective on this whole thing?

Toby Bordelon: Yeah, I think there’s a lot going on here, right? I mean, one thing Demitri said about that 2.7% of people who quit their jobs, I think was the number there, that plays into this a little bit, right? I mean, even in environments where we have what we call full employment, there’s still some unemployed people for precisely that reason, right? People lose their job or they quit their job and they’re between jobs, but they’re going to get another one, right? There’s always that little bit of flexibility in this, and there’s always going to be some number of unemployed people in transition from one place to another and you’ll never get that to zero, and it’s not healthy, right? Economists will tell you if unemployment gets to be too low that’s actually bad for the economy.

One thing we’re seeing here is we’ve all heard about the labor shortage. I think most people are pretty convinced that if they want to get the job, they can do that or people who are currently employed. If someone says I don’t want this job they’ll just quit. We’re not in a situation where you line up another job first necessarily. You’d say, “Well, I’m out, I’m going to look for another job.” That’s going to stress, that’s going to increase that type of unemployment that between job searching and you’re going to see that potentially in the tick-up we saw this time. That doesn’t necessarily mean anything is going badly. It just means we are a different scenario.

I think a lot of what’s happening, too, follows on Demitri’s point about changing priorities. People are just leaving the labor force. You think about what happened in the pandemic — schools closed, forcing some parents to quit their jobs. Some people lost their jobs in the pandemic and were forced to stay home. I think a lot of people probably could go back now if they wanted to, but they are not doing that and some of that is by choice definitely. They are reevaluating their priorities. People have talked about either strong unemployment payments being a factor. That might be, but I think a lot of it is also just reevaluating priorities and people are deciding, I just don’t need to work right now. I think that’s especially true when you think about formerly dual income households with young children. One person could say, you know what? We try this because I lost my job. I was forced to stay home or I had to stay home with the kids were in school, and it’s just better for our family if we have someone home. So let’s just keep doing that. There’s no reason for both of us to work.

Or maybe they’re working part time from home, but that’s not counted. You’re not seeing that. You’re still thinking job go and fill because they’re not taking that all. I got a part-time gig and that’s fine. I think there’s a lot of that. I think another factor you want to think about is they are just different jobs and more jobs out there perhaps now. We’ve seen surging stock price in companies this past year. It’s because business is booming. They’re hiring people. We talk about all these companies that we’ve done deep dives on, Brian. Oh, we’re hiring X number of people. We’re trying to at least I guess the implication there. But not all of these companies existed a decade ago. Not all these industries even existed, and it takes a while to shake out in terms of retraining people, in terms of people being aware of what’s out there. We hear owners sometimes complaining and small businesses like I can’t hire people, people don’t want to work. Maybe they don’t want to work for you at what you’re trying to pay. [laughs] But drive around any random town on this country and you’ll see work’s getting done somewhere. People are out there, they’re driving their cars places. They are doing things. There are so many factors I don’t think you pick one, but it’s definitely a shift. It’s definitely a transition we’re seeing right now.

Why is Biden doubling down on Trump’s nuclear expansion?