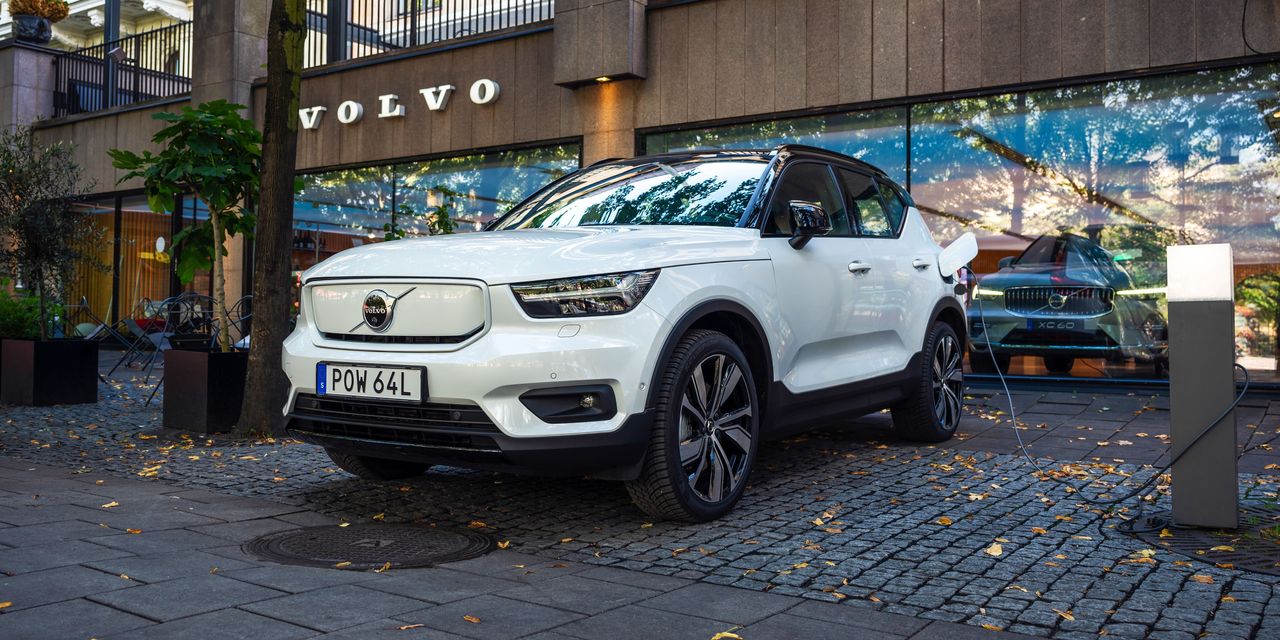 Volvo Cars, the Swedish auto maker owned by Zhejiang Geely Holding Group Co. of China, is completing plans for an initial public offering and is set to announce details of the listing as early as Monday, in a deal that could value the car maker at as much as $25 billion, according to people familiar with the matter.

A listing, if it goes ahead, would represent one of the car industry’s most dramatic turnarounds.

, weakened by the global financial crisis, sold the Swedish company to Geely for $1.8 billion in 2010.

Volvo has long capitalized on a brand recognized for safety, but at the time of its sale, its product lineup had failed to excite car buyers. Geely bankrolled Volvo’s recovery over the next decade, opening China as a market for the brand and providing financing to help the company revamp its model offerings.

Today, Volvo is profitable, with a road map for electric-model rollouts that is ahead of some competitors. Its brand is back in fashion in the U.S. and elsewhere. It now competes with German premium brands, including BMW maker

For the first half of this year, Volvo reported a 41% increase in sales over the same period last year, to 380,757 vehicles. The company’s sales in the U.S. rose 47% to 63,754 vehicles. Europe remains Volvo’s biggest market.

At a valuation of $25 billion, Volvo would be bigger than European car maker

which has a market value of a little more than $10 billion. That is despite Volvo selling a fraction of the cars Renault sells each year. Volvo’s size, though, would pale against the world’s biggest car makers, including

and Volkswagen, underscoring the competitive challenge the Swedish company faces. Its value would also sharply trail the $767.5 billion market capitalization of electric-vehicle leader

Still, a listing would provide investors another competitor to bet on in an auto-industry race to roll out electric vehicles. Volvo was the first conventional auto maker to begin phasing out internal-combustion engines, ending its production of cars only powered by fossil fuels in 2019. Since then, every new Volvo is either a fully electric or hybrid model.

Most big auto makers have since said that they also will be phasing out conventional engines in new vehicles, by around 2035.

Volvo has floated the idea of a possible listing as far back as 2018, and in May said it was considering an IPO on the Stockholm stock exchange. Such a listing could provide the company a broader shareholder base and greater independence from its Chinese investors. In September, Reuters reported that Volvo was in talks to list its shares in the coming weeks.

It isn’t clear how big a stake Geely plans to sell, but it has previously indicated it would likely remain a major shareholder after any offering. A decision on the details of the listing and its public disclosure could be delayed, but people familiar with the plans said a final call was imminent.

An offering would come amid a frenzy of investor interest in electric vehicles and after an EV-focused Volvo affiliate made its own move to take advantage of that enthusiasm.

Last week, Polestar, a Swedish electric-vehicle maker jointly owned by Volvo, Geely and others, announced plans to merge with a special-purpose acquisition company and list in New York in a deal that would value the Swedish EV company at roughly $20 billion.

The Polestar deal generated a pathway for Volvo to pursue its own offering by assigning a value of about $10 billion to Volvo’s stake, according to some of the people familiar with Volvo’s listing plans.

Earlier this year, Volvo and Geely backed away from considerations of merging Volvo with Geely Auto Group, raising expectations that the company would pursue a separate listing and greater independence from Geely Holding.

“Volvo Cars is especially well-positioned to deliver continued growth and harness the full potential of electrification and the delivery of safe autonomous-drive functions,”

chairman of Geely Holding, said in May.

By 2009, when Ford put the company up for sale, Volvo was struggling. After Geely stepped in, it poured in money. Over the course of a decade, Geely invested more than $11 billion, financing a modernization of the company’s model lineup, an early shift into electric vehicles, and factories in China that helped Volvo cash in on China’s surging appetite for Western cars.

In 2018, Volvo opened its first U.S. factory. The brand had once been a household name in suburban America in the 1970s. But it had to rebuild its business in the world’s most lucrative car market.

Volvo produces the S60 sedan in Charleston, S.C. Next year, the South Carolina plant intends to produce the XC90, a large, electric, premium sport-utility vehicle. Volvo has invested more than $1 billion in the plant and employs 1,500 people there. The company has said that its U.S. plant will be the first to shift entirely to electric-car production.

Write to Ben Dummett at ben.dummett@wsj.com and William Boston at william.boston@wsj.com